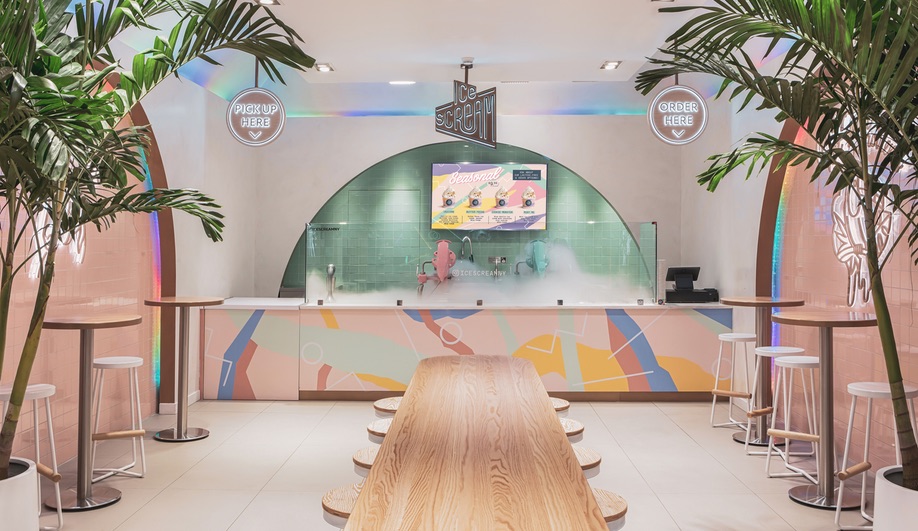 Ice cream isn’t just for summer anymore. The late November opening of Ice Scream, in New York’s Bronx borough proved that the chilly treat’s appeal has grown beyond the summer season. Over the past few years ice cream has been at the centre of some of the biggest food trends: we’ve seen it coloured with charcoal, mixed with cereal, and served up in cones shaped like chimneys, bubbles, fish and taco shells. 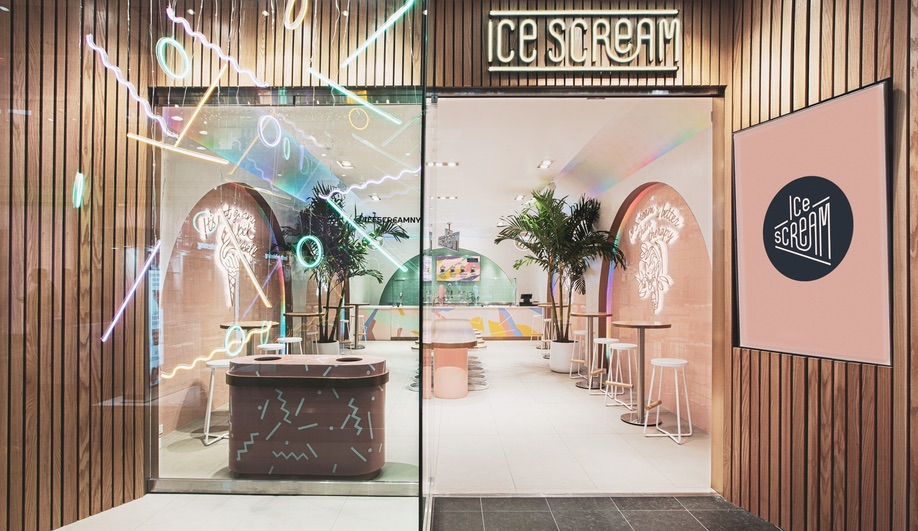 Within its Memphis-inspired interior by New York studio Aesthetique, Ice Scream serves up its decadent desserts by employing a dramatic preparation method. Its ice cream is made to order using liquid nitrogen to flash freeze the ingredients as soon as they are combined in colourful mixers behind a glass-wrapped prep area. 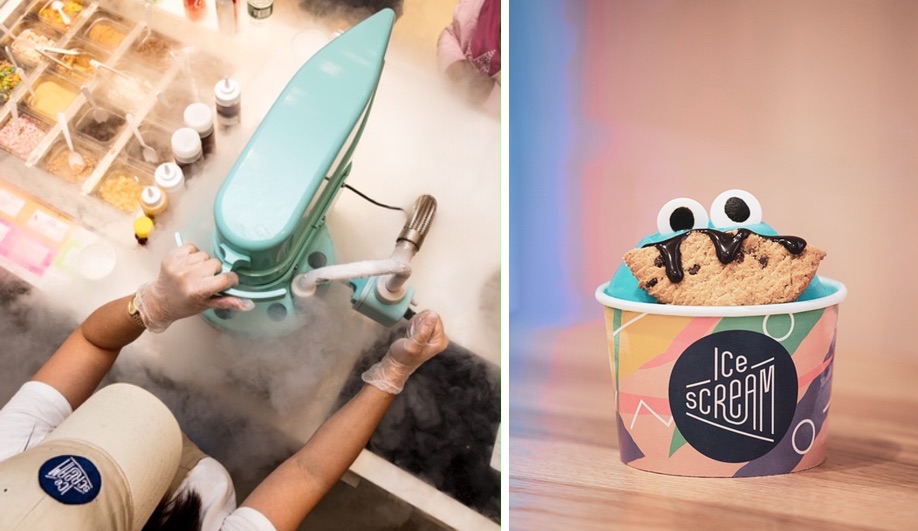 Obscured by a cloud of nitrogen smoke, the mixers – in bubblegum pink and minty green – are where the magic begins at Ice Scream, which makes the counter the undeniable focal point of the space. Criss-crossed with irregular streaks of soft pastels against a pale pink background, the feature is backed with a wall of glossy mint tiles framed in a large archway. 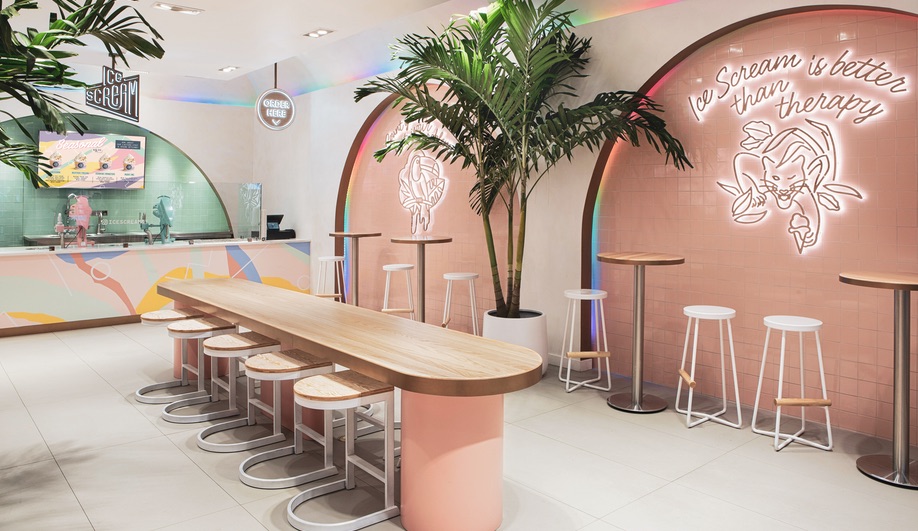 The arch motif is repeated twice over on each sidewalls, this time with gleaming pink tile and framing neon signage. A sense of movement is added with a kinetic rainbow of LEDS cove lighting, which wraps the arch interior and also tops the walls, which curve gently into the ceiling. “All edges where the wall meets the ceilings have been bevelled,” explains the firm, “as if carved by an ice cream scoop.” 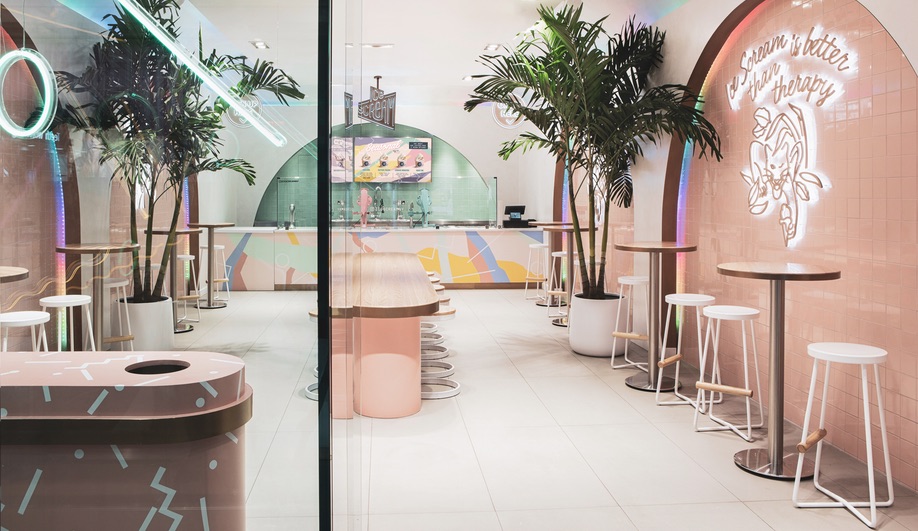 The pop art neon displays feature animals including toucans, wild cats and unicorns, adorned with branded messages such as, “Count your sprinkles, not your problems” and “Ice Scream is better than therapy.” 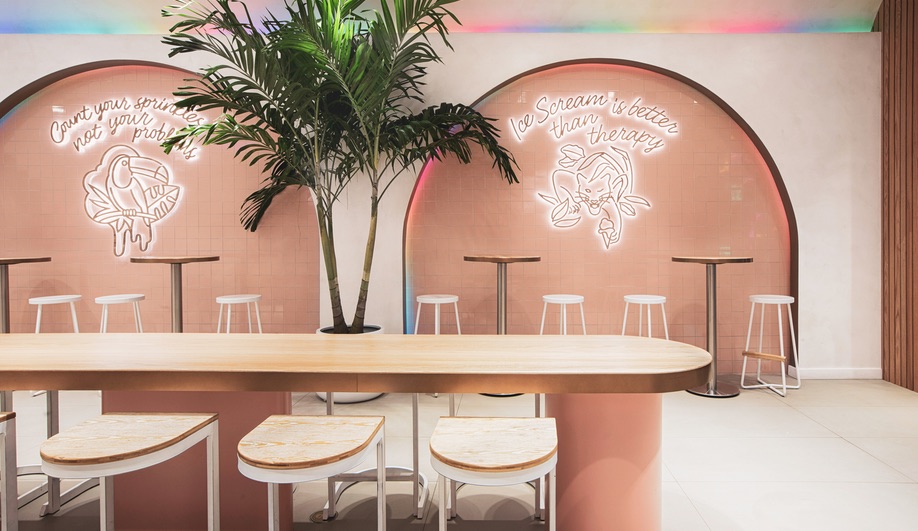 Complementing the pastel palette, 24 white-and-wood stools are paired with white oak–topped tables, including a 15-foot-communal station perched atop two pink cylindrical legs. The wood lends a touch of warmth to the space, as do a pair of ceiling-height potted palms. Positioned between the sidewalls’ arches, the green features are an unexpected addition that helps draw attention to the Ice Scream’s mall storefront. 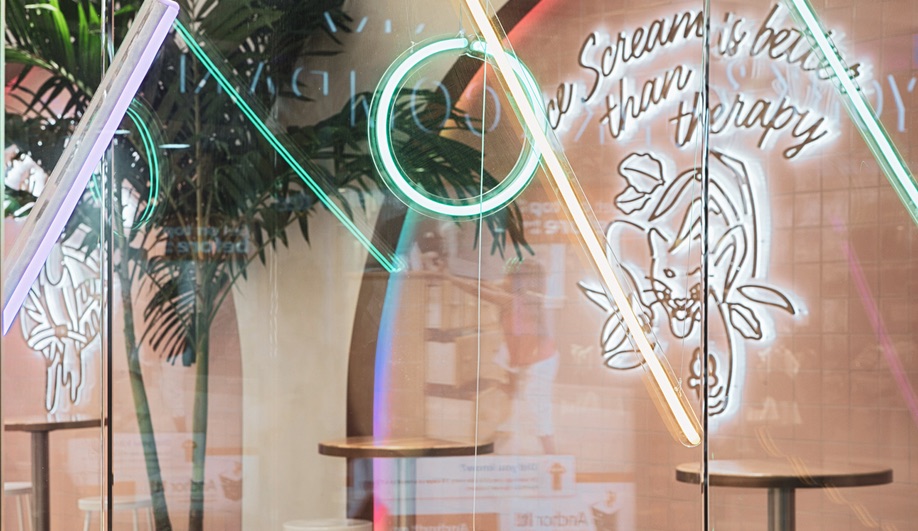 SHARE
Twitter, Facebook, LinkedIn, Pinterest, Email
TAGS
Interiors, Restaurant,
AZURE is an independent magazine working to bring you the best in design, architecture and interiors. We rely on advertising revenue to support the creative content on our site. Please consider whitelisting our site in your settings, or pausing your adblocker while stopping by.