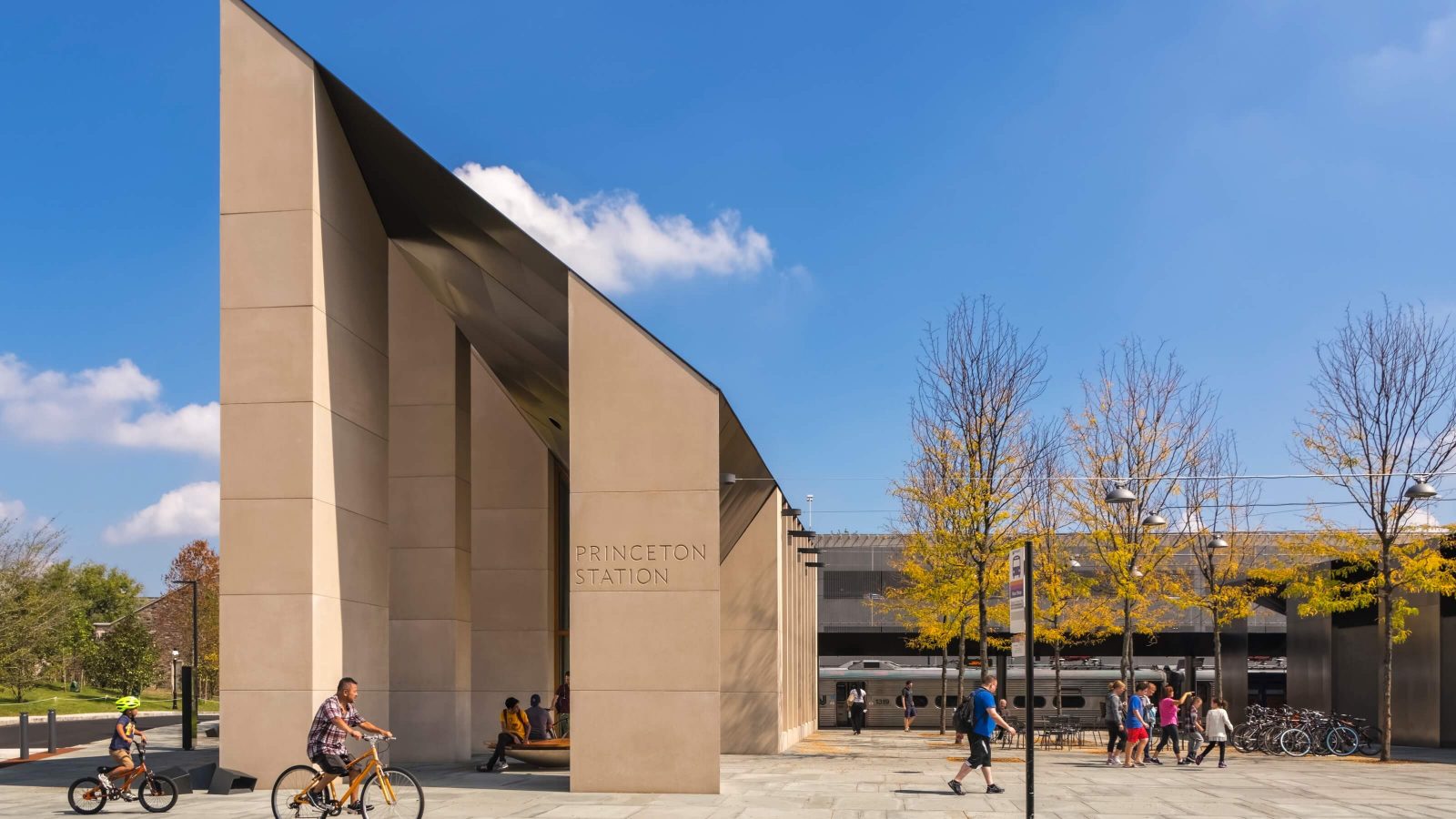 Beyond Desert Modernism: A Conversation with Rick Joy

We caught up with Rick Joy as he recently released his latest monograph and completed his first public building – the Princeton Transit Hall and Market.

Rick Joy creates sublime houses. From the Tucson Mountain House (2001) to the Desert Nomad House (2005), his residential projects stand as odes to their amazing locations in the Southwest desert. But the architect, who also designed the dreamlike Amangiri resort in Utah with Marwan Al-Sayed and Wendell Burnette in 2009, has lately ventured into other terrains. In 2018, he completed his first major public project with the Princeton Transit Hall and Market. He also released his second monograph in 15 years, Studio Joy Works, in which he lays out the core values of his firm as it expands its focus to major projects in Mexico City, the Turks & Caicos and more. We sat down to talk with Joy about this point in his career, when he’s finally shaking off the label of desert modernist.

Let’s talk about your latest book, Studio Joy Works. What was the biggest challenge in translating your work into a book format?

It’s a learning experience, especially in writing the essay – you start learning about what you’ve been thinking about. How do you put that into words? The essay is really an attempt to dig down deep, and to try to teach the new young people in the firm and steer them in our lineage. I’ve actually taken that essay and developed a range of core values from it.

What is the essence of some of these core values?

The first is to be comprehensively observant at all times. That’s the starting point for being able to teach and create – for instance, to teach clients how to live on a particular site and what to gain from that experience, and to try to find a way to enhance the atmosphere and the lifestyle of the place. It’s much more than making a floor plan. The most vivid example is the Desert Nomad House; it is deliberately focused on the lighting events and the views specific to each… I don’t even call them buildings, but instruments that frame the views.

Then I talk about being conceptually insightful and giving. It’s important for the person to walk outside on the ground and experience nature. Then the fun starts to happen. For Desert Nomad House, we planted six human-scale Solaris cacti on the way between the buildings, and the owner actually puts a Santa hat on one of them and says goodnight to it. It’s a lot of fun added from just dreaming about something better for them. 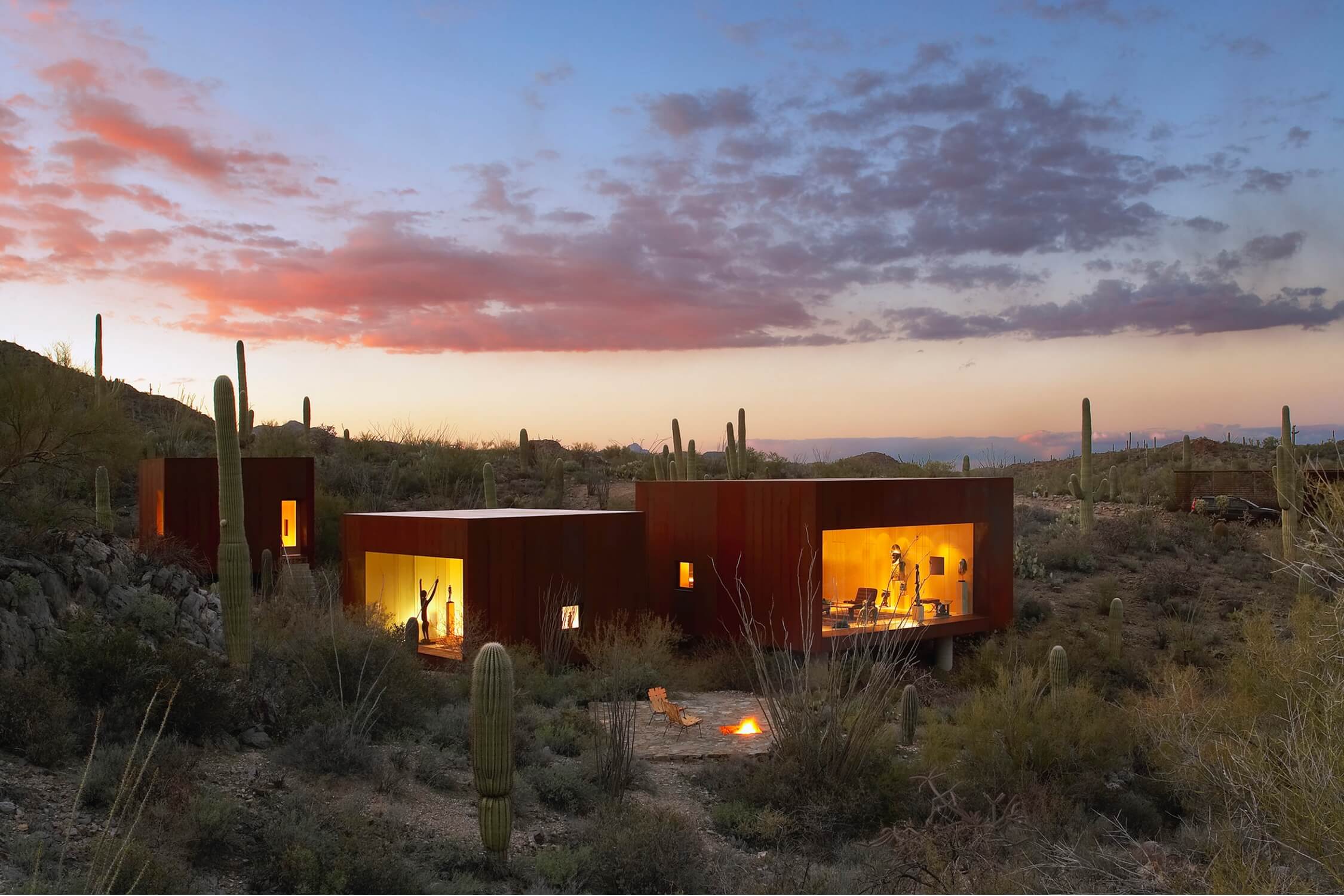 How does your process begin?

I used to spend a lot of time studying the site. Now with all my experience I’m quick. I just get things faster now at my age and experience. I can go through MoMA in New York in like an hour, and I get it all in. Whereas I used to stay and sketch and look at each piece and sit down on the bench and absorb, I don’t have as much patience now. I just get things quicker.

Also, it’s not just me – I have a whole team of people. A lot of the time what I’m doing is narrating my thoughts to them: “Okay, you go study that and you go study this. We’ll meet together tomorrow and see where it’s headed.” There are too many people who’d be sitting around waiting for me to sketch. That’s the other thing that’s happened with this book: when I started really trying to describe how we work, the term we came up a lot. It really is a cooperative team.

Along with the book, you also recently finished your first public project, the Princeton Transit Hall and Market. What were the challenges there?

Well, the client is Princeton University, but it’s the gateway to both the campus and the town. Doing a public building like that is a little frustrating because of all the things you have to do to defend the building against people who don’t take care of it – like smokers, say. We have benches in there by the Nakashima family, whose works are in museums and permanent collections – I just naively went up to visit them and said, “You wouldn’t want to do the benches for us, would you?” – and I have photographs of people sitting on the floor eating meatball sandwiches on Nakashima and skateboarders hitting around out in front. 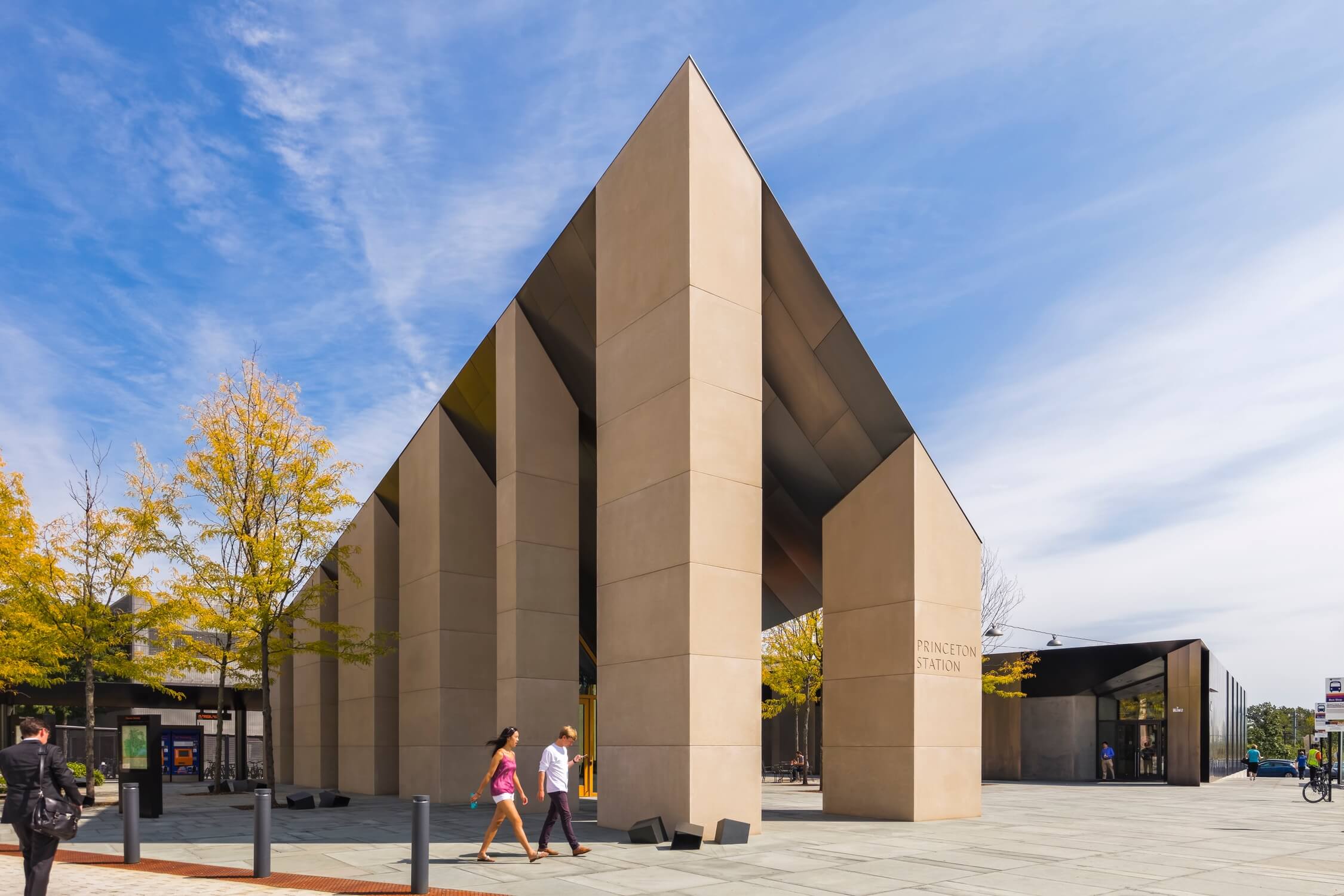 Also, a lot of our work’s difficult with contractors because we’re trying new things. Here, we were building with only four materials ­– wood, precast concrete, blackened stainless steel and blue stone ­– and no forgiveness at the joints. But for a public project, this was a really great one because it’s a train station, and it’s on a Gothic campus. It was an opportunity to make our version of Gothic. It’s a train station but feels more like a chapel inside. 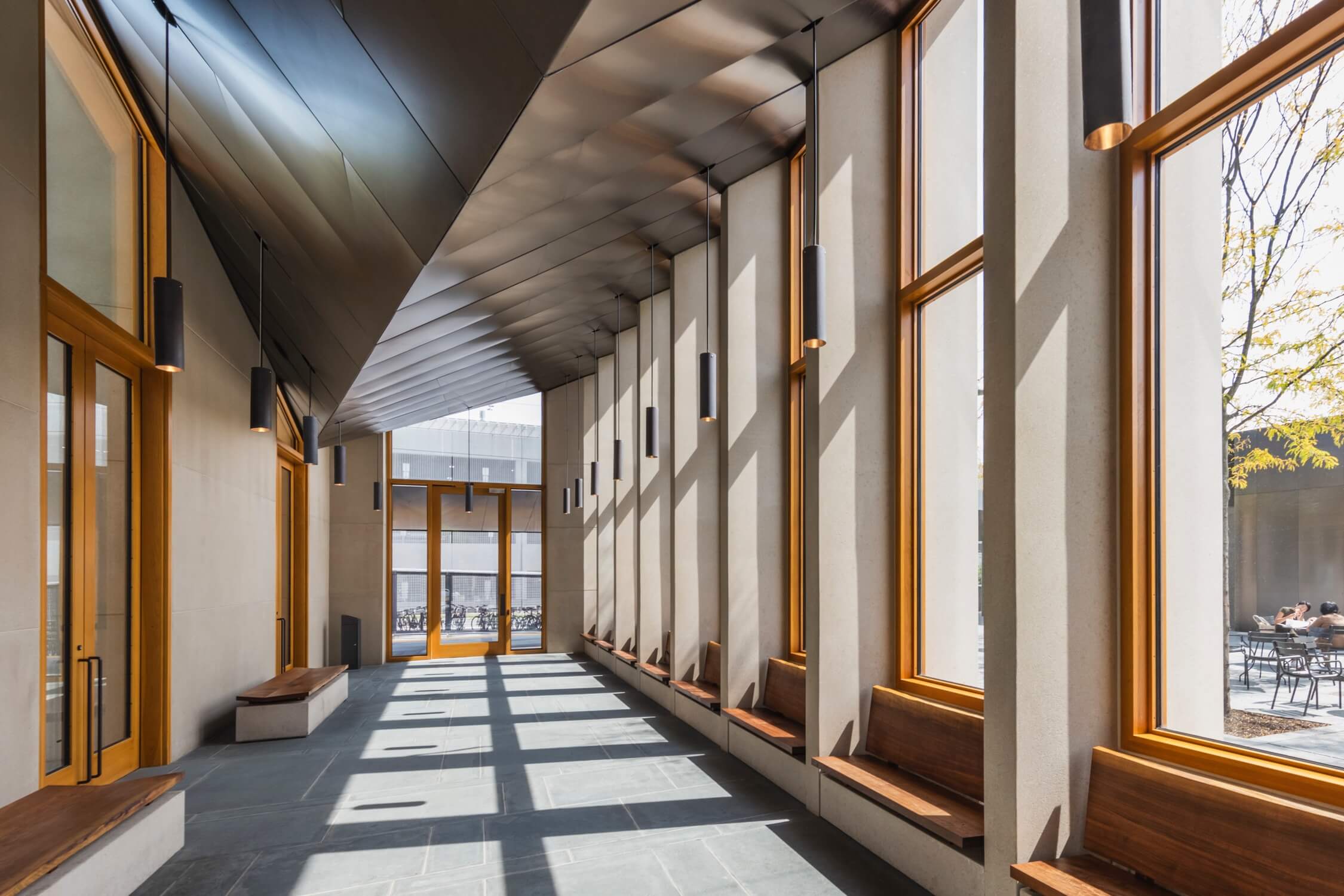 What other major projects are you working on?

We’ve got a project in Mexico City – one of our first super urban projects. It’s a five-storey apartment building in the wealthy Polanco area. It’s all board-formed concrete cast in place. And the entire outside is granite and slate, with a slate roof. This client owns the largest Jackson Pollack painting. Why I get contacted by wealthy people to create luxury, it’s hard to understand. I did not grow up with luxury at all.

I grew up in Maine in a small town. If you live in a place like that, when something breaks, you just intuitively fix it. You don’t throw it away and buy another one. That was my upbringing until I was almost 28 – I was playing music for a living before I decided to do architecture at the age of 28. I was in the symphony. I can play timpani, snare drum, triangles and all that stuff. I was really odd to these 30-something-year-old Black guys I was playing Motown with. We did all original Earth, Wind & Fire.

That’s interesting because the other senses play into your work. I love how your book even references the crunch of gravel underfoot and similar sensations of the site.

Well, that’s good you picked up on it because people ask about the relationship to music, and it’s really more about that stuff. It’s more like writing lyrics. As a drummer, the groove was my department, making the song feel a certain way. I do that in architecture. Most people expect me to talk about mathematics and music, and all that kind of stuff. I’m talking more about- 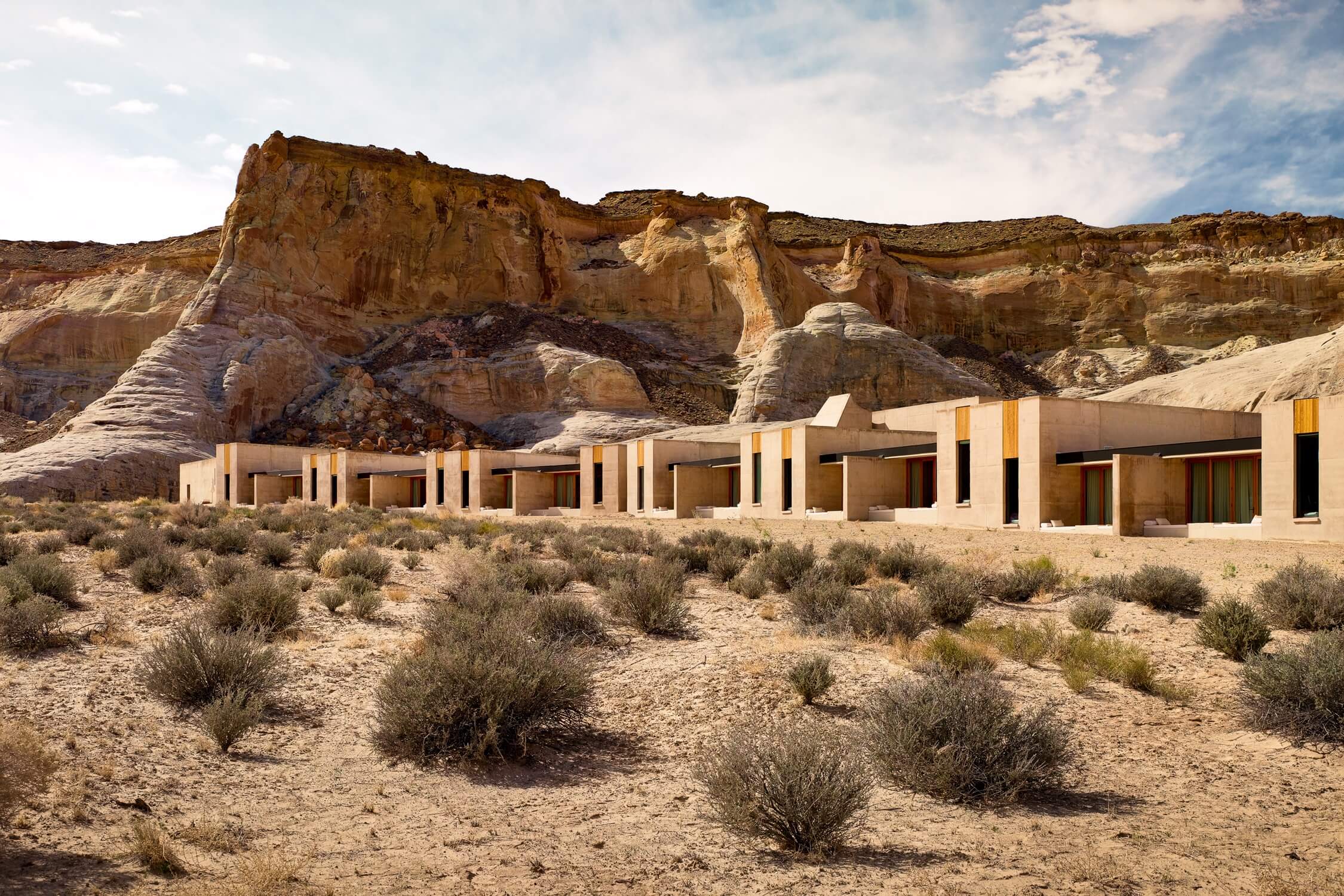 We’ve done a few projects now completely off the grid. There’s one in Tucson – the Tucson Mountain House that’s off grid even to a greater degree because we’re using rainwater since there’s no functioning well nearby. So, the household’s water is filtered, processed rainwater. And it’s fully off the grid with solar, too. That was over 15 years ago. 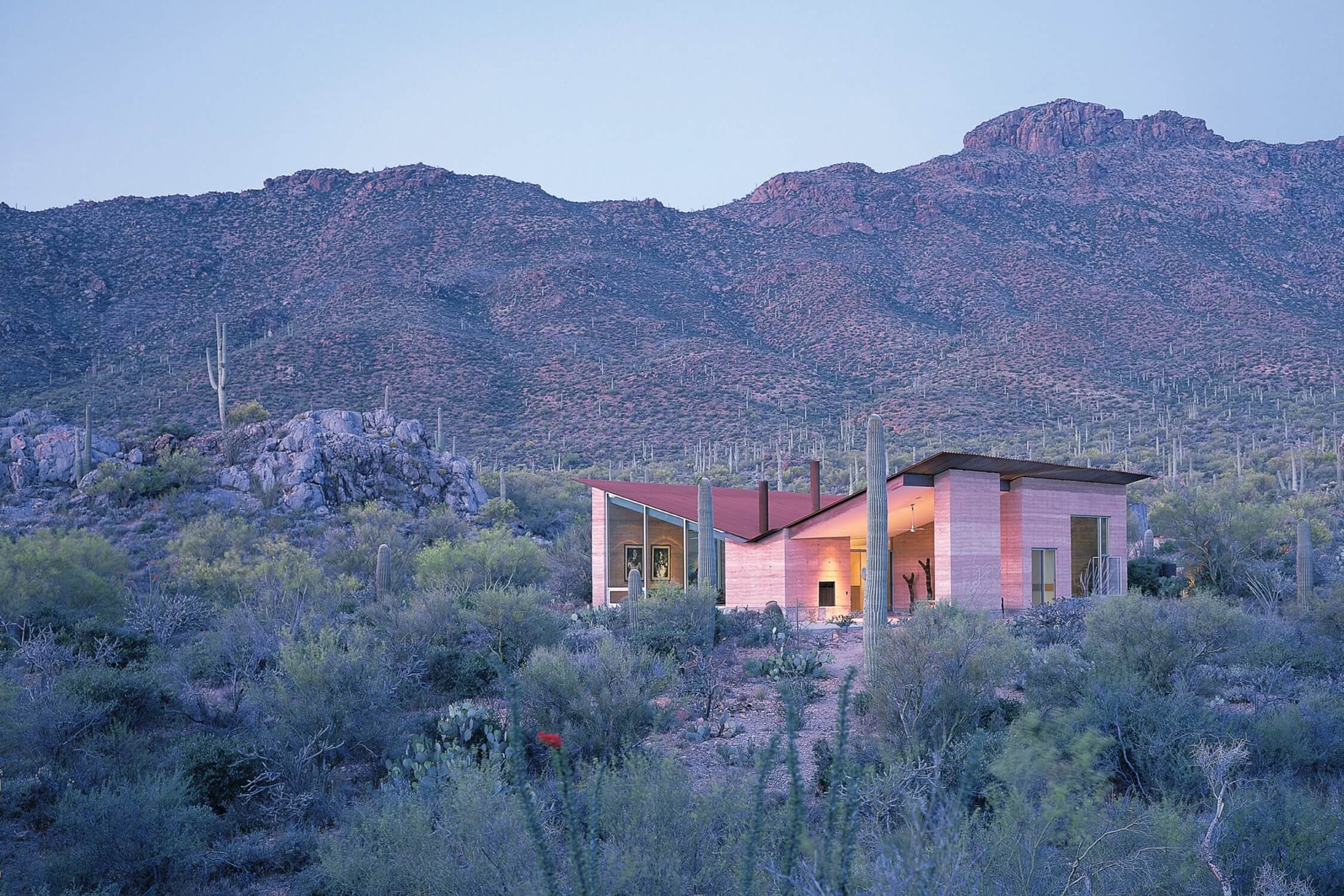 You’ve been called the master of desert modernism. How do you feel about that?

I don’t like it. I don’t do desert modernism. I don’t do any isms whatsoever. I actually haven’t done a desert project in a long time – since finishing Desert Nomad House. But we’re getting ready to do one again, a 20-storey tower in Tucson that’s 600,000 square feet of mixed use.

But, no, I’m not into the desert modernism thing. When you think about it, I’m doing more island culture projects than anything desert. We have two house projects in Ibiza. We were invited to participate in a project called Sabina Estates, along with John Pawson, David Chipperfield and others, including local, Spanish architects. And I’m going to see somebody in Goa in India for a resort project there, which I hope to get done – there’s a quarry on this giant site that has this red rock that looks like raw Kobe beef, a red stone with marbling streaks. I’m going to use it for the brick of the hotel.

We caught up with Rick Joy as he recently released his latest monograph and completed his first public building – the Princeton Transit Hall and Market.