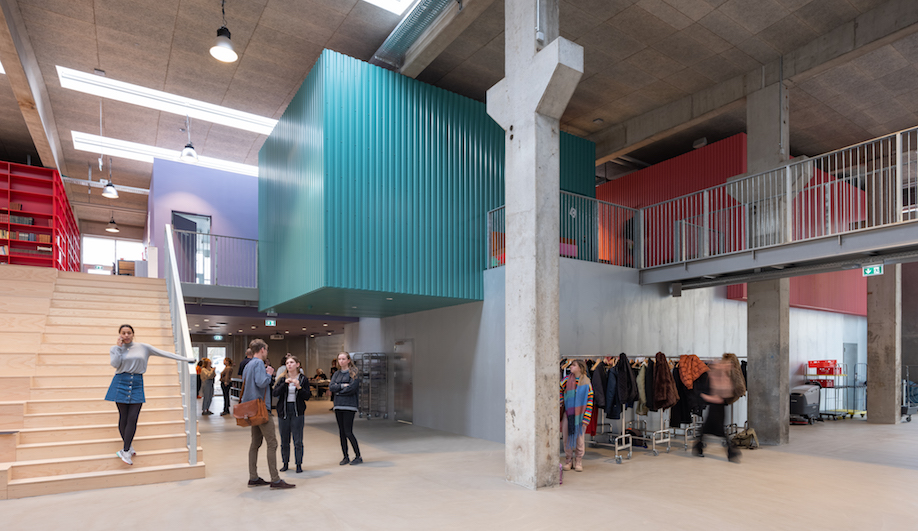 From fashion and lifestyle trends to political movements and grassroots activism, major music festivals often influence the wider world to inspire change. In the Danish town of Roskilde, the eponymous summer music festival now reaches into the community more incisively at the new Roskilde Folk Festival High School. Designed by Rotterdam’s MVRDV and Copenhagen’s COBE, the adult-education boarding school adds a major facility to the town’s Musicon district (also masterplanned by MVRDV and COBE; more on that later). Evoking the festival’s spirit of communality, the adaptive reuse project reimagines the rectilinear form of a former concrete factory as the catalyst for a surprisingly varied and fluid learning environment. 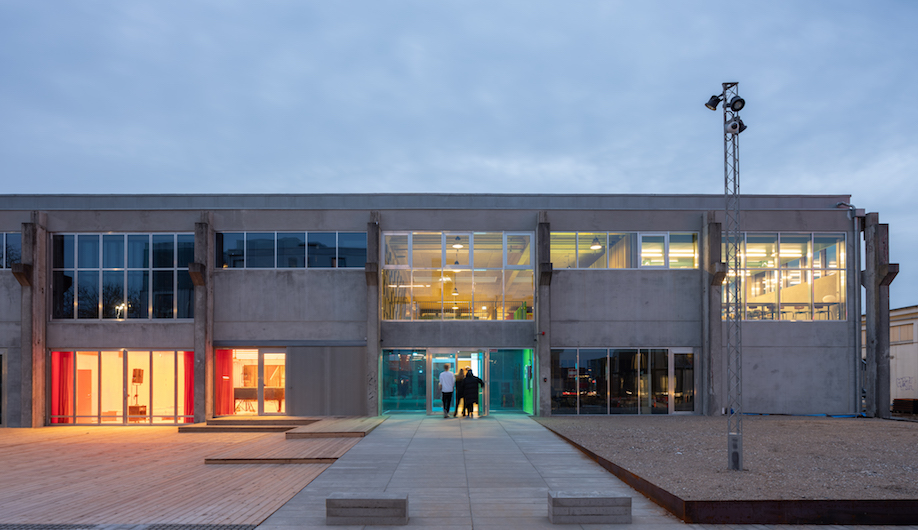 “Our design, just like the school itself, was inspired by the spirit of the Roskilde Festival. It is all about music, art, activism – but most of all, freedom,” says MVRDV co-founder Jacob van Rijs. “The Roskilde festival combines ‘having a good time’ with innovation in an informal way, giving a special vibe that we wanted to capture in the design of the interior of the school.” 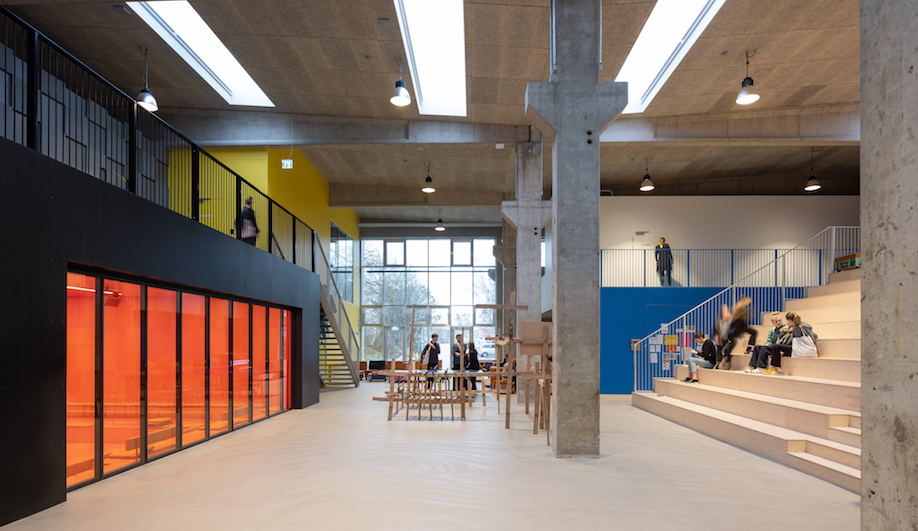 Inside, a good time awaits. The hulking volume of the factory’s concrete shell provided the starting point for what the designers characterize as the “box-in-a-box” concept that organizes the circulation and program. Since the original building had already been heavily altered throughout its lifespan, MVRDV and COBE opted to maintain only the concrete girders and pillars that frame the structure. Along the new building envelope, however, they used exposed concrete and expansive factory windows to recreate an industrial – and slightly unfinished – aesthetic, hinting at the school as a place of creation. 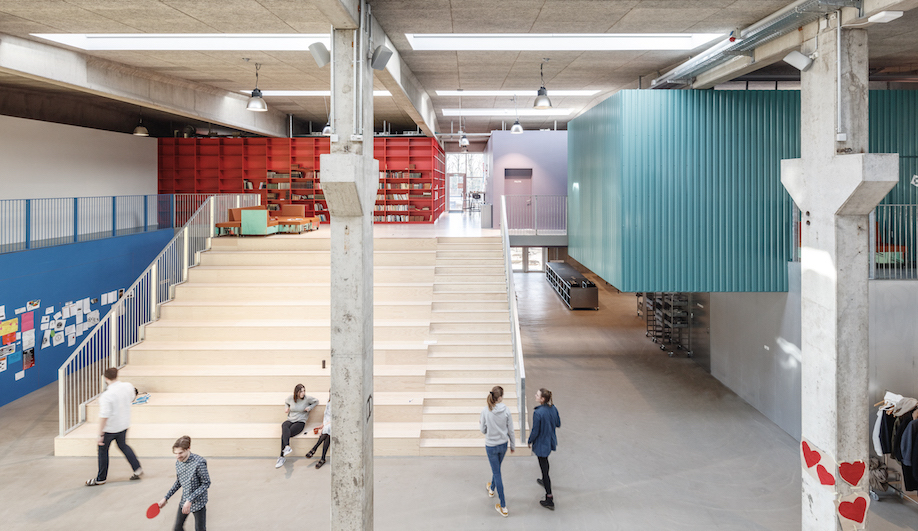 A central corridor highlights the generous double-height space, drawing attention to the concrete structure’s subtly expressive angular form. The simplicity of the school’s raw concrete spine is also a unifying element for the school’s eclectic “box-in-a-box” inner volumes. Concrete girders and pillars underscore a consistent identity, allowing the rich variety of textures, colours, and typologies to become part of an impressively integrated whole. 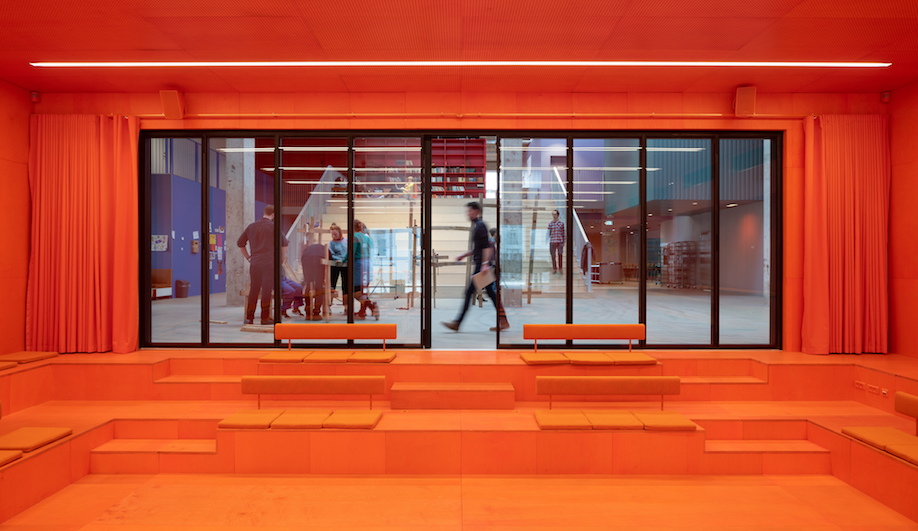 Spread across two stories, the colourful modules host an impressive variety of functions. Named for the main stage of the Roskilde Music Festival, the declarative Orange Stage auditorium seats some 150 people, while a series of smaller spaces are arranged by function into three distinct zones. Spaces for contemplative activities — including writing, reading and debate — are grouped together, separated from more active venues for music and dance. Finally, tactile activities like art and design are housed in a third zone. The discretely delineated zones allow a broad and evolving range of uses to coexist in a relatively compact space without disruption. 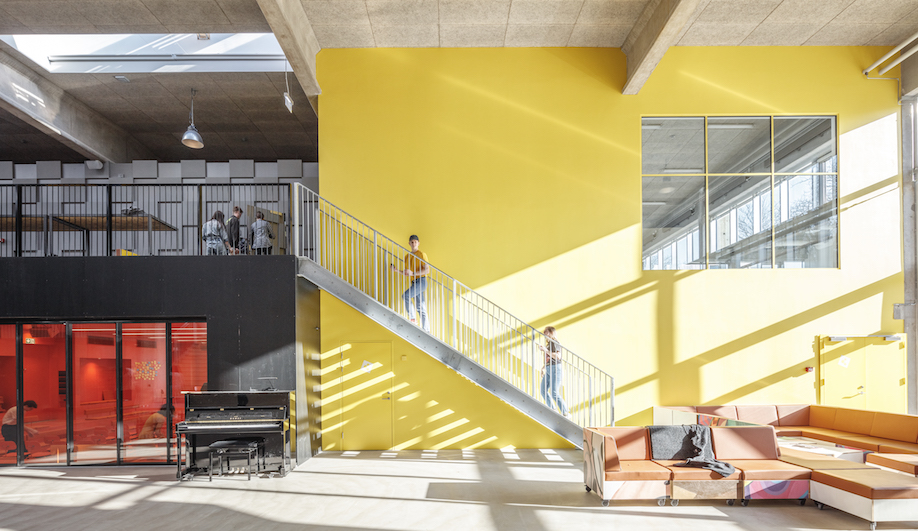 The highly varied educational program is complemented by a series of hangout spaces, including the central steps, and a series of quieter seating areas. A sense of informal communality permeates throughout. Most shared spaces are open to their surroundings, fostering easy collaboration between individuals and disciplines. On the second floor, a prominent terrace creates a ring of open space at the heart of the school, linking a diverse array of learning environments. By contrast, the irregular array of volumes also creates a series of quieter nooks, inviting more intimate interactions. 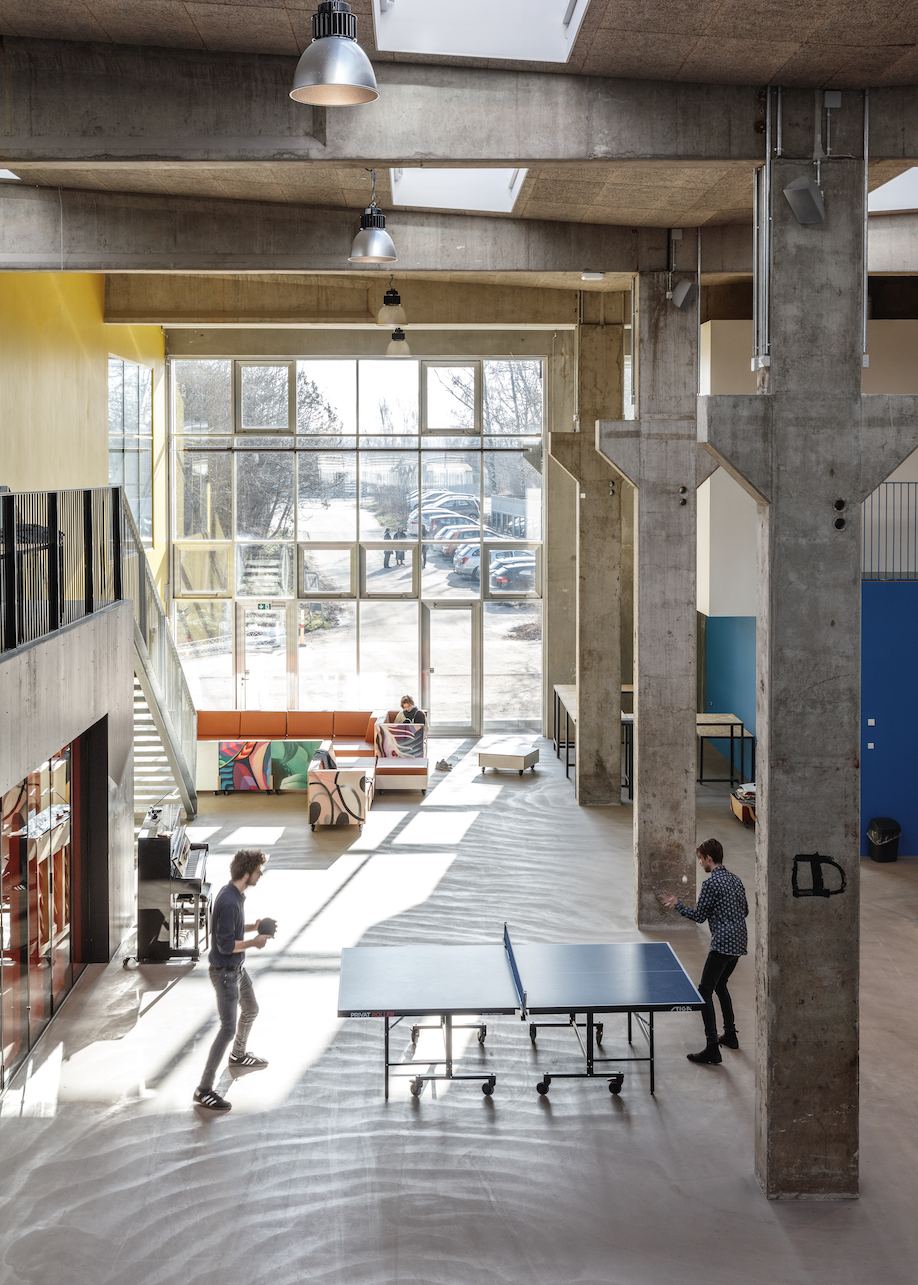 For students, the combination of boldly designed learning environments and flexible communal spaces encourages a dynamic and collaborative approach to education – a physical and intellectual departure from the confines of the classroom. 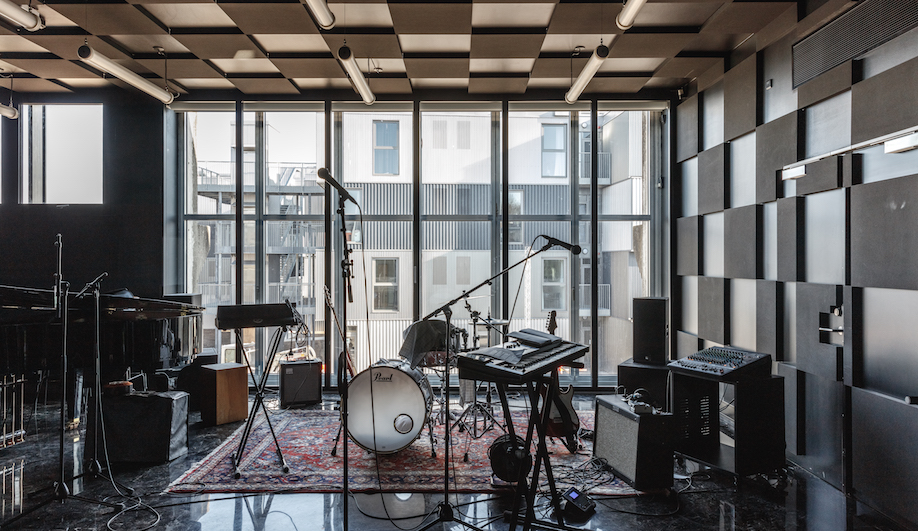 In addition to the music festival ethos, the Roskilde Folk Festival High School school draws on the historic precedent of Nordic “folk high schools.” Founded on the ideas of 19th-century Danish intellectual N.F.S. Grundtvig – who believed schools should encourage students to be active participants in society – the folk schools (which typically did not grant diplomas) offered freer learning environments, stripped of state-mandated curricula. In Roskilde, the new school is the first folk learning institution to be built in Denmark in nearly half a century. 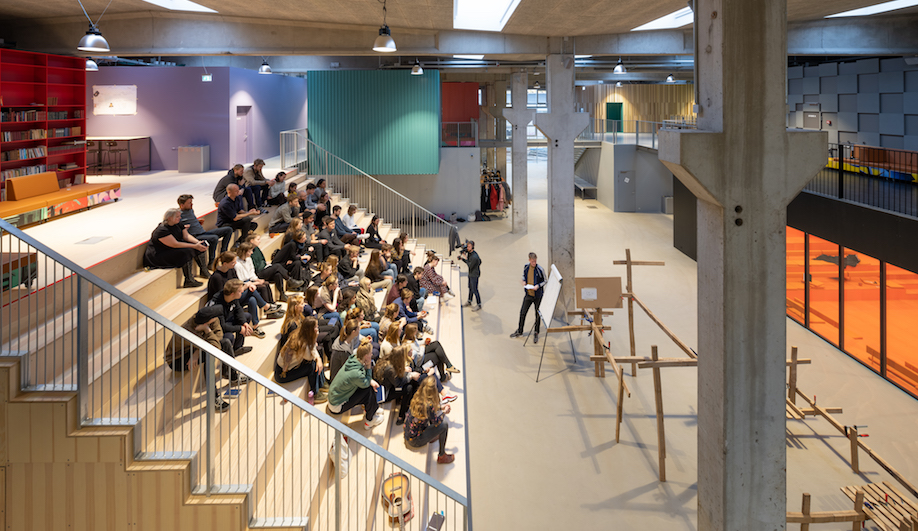 For COBE founder Dan Stubbergaard, personal experience helped guide the design. “For me, as a former folk high school student, it was a very special task to transform a former concrete factory into a folk high school with the purpose of shaping future generations of students,” he says. “By opening the building up and adding new boxes inside the old structure we revitalized the building. A defunct industrial building has become a bustling hub for creativity and community.” 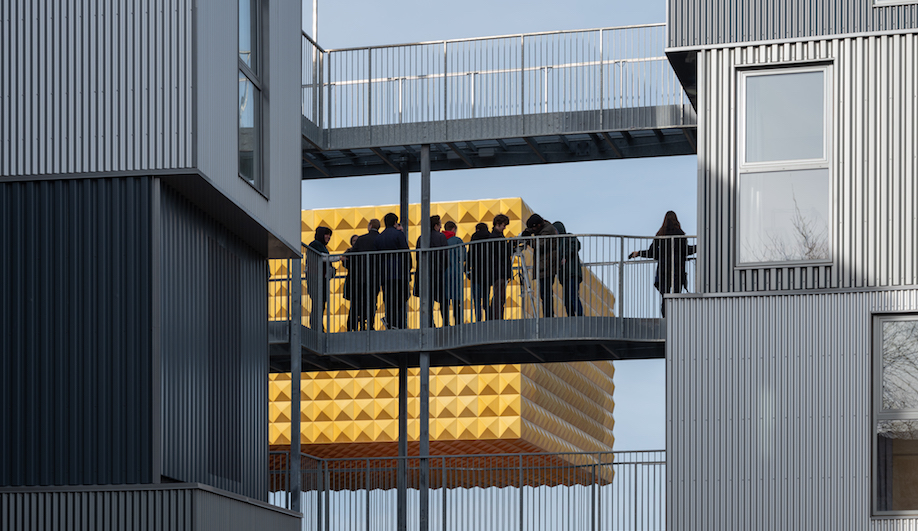 Alongside the school, MVRDV and COBE have also designed new housing for both students and teachers. Students are housed in a pair of buildings inspired by shipping containers, while a series of similarly metal-clad row houses are reserved for teachers. Compared to the school itself, the residential buildings are much less architecturally compelling. Nonetheless, the new housing introduces an important mixed-use component to the Roskilde Music Festival’s Musicon district.

Masterplanned by MVRDV and COBE, the festival’s 11,000-square-metre Musicon district already features the gold-studded Ragnarock museum (also designed by MVRDV and COBE). The museum’s unmistakable yellow box is now joined by the quieter shell of the neighbouring school building. It’s a comparatively subtle design, though one that unfolds with refreshing vitality and freedom — all inside the box.

SHARE
Twitter, Facebook, LinkedIn, Pinterest, Email
TAGS
Cultural, Education,
AZURE is an independent magazine working to bring you the best in design, architecture and interiors. We rely on advertising revenue to support the creative content on our site. Please consider whitelisting our site in your settings, or pausing your adblocker while stopping by.