The Fort McMurray Airport Terminal Is a Prairie Oasis
Vancouver firm OMB has designed a tranquil and expansive terminal for this booming international airport in Wood Buffalo, Alberta. 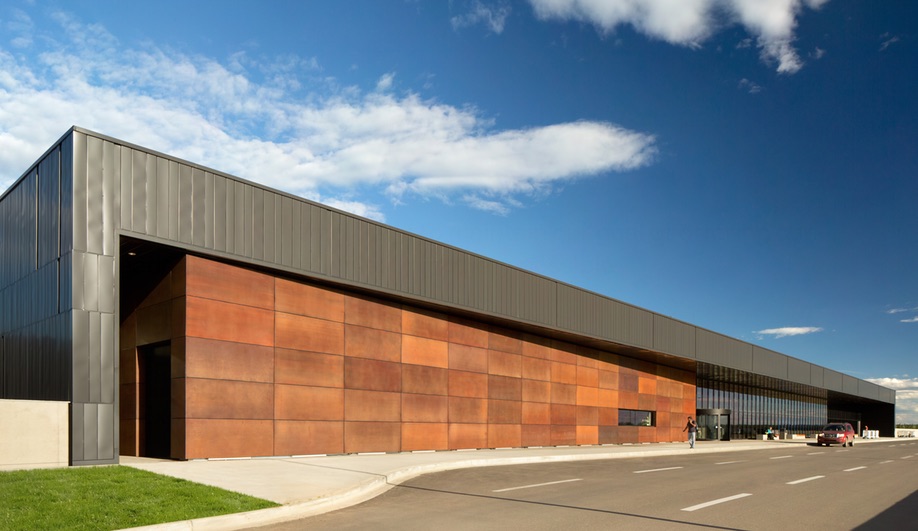 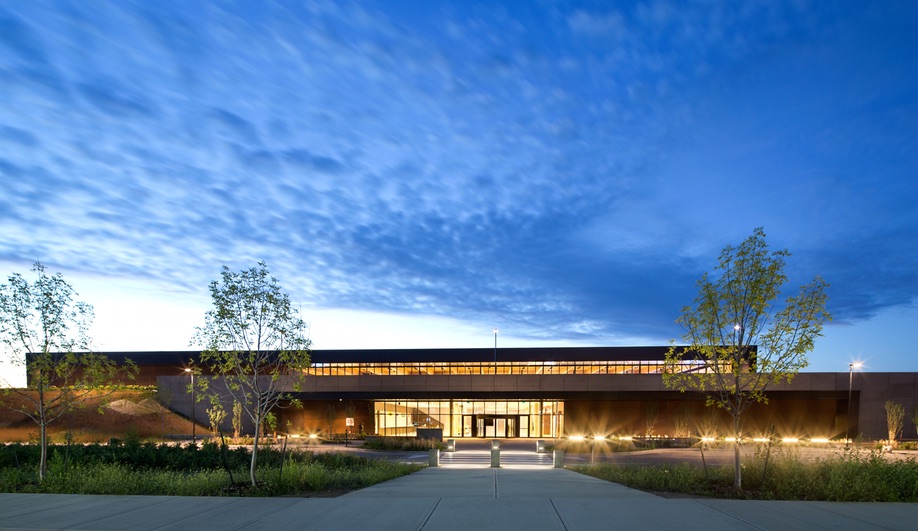 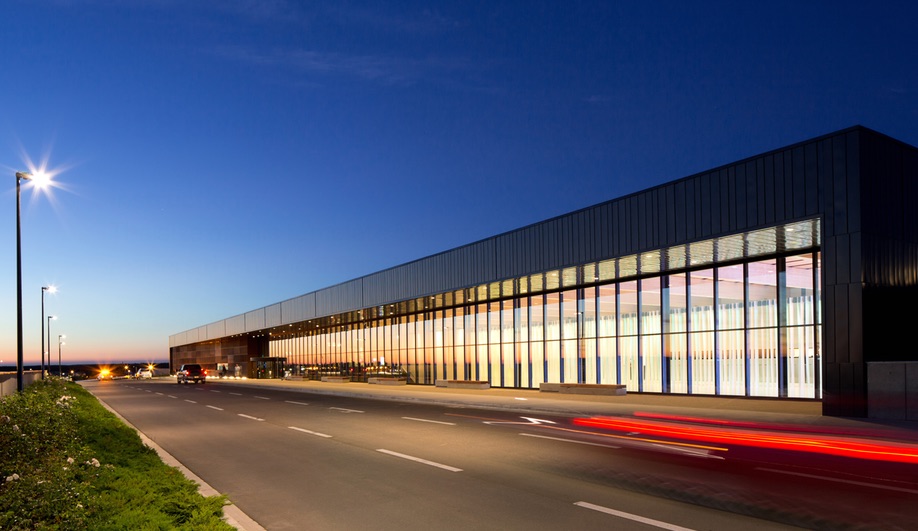 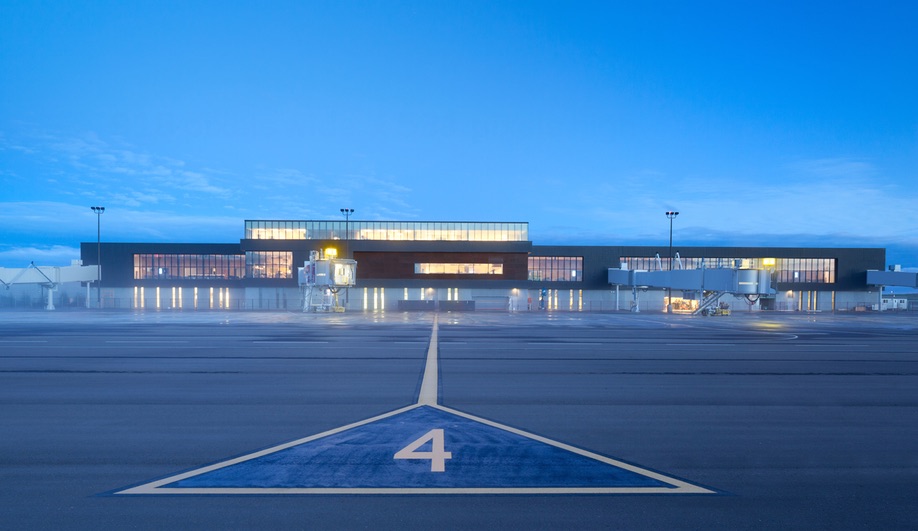 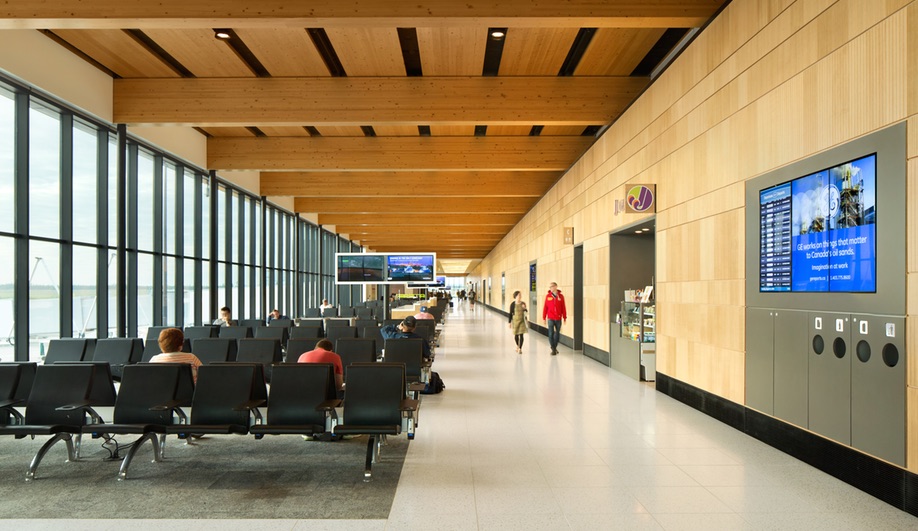 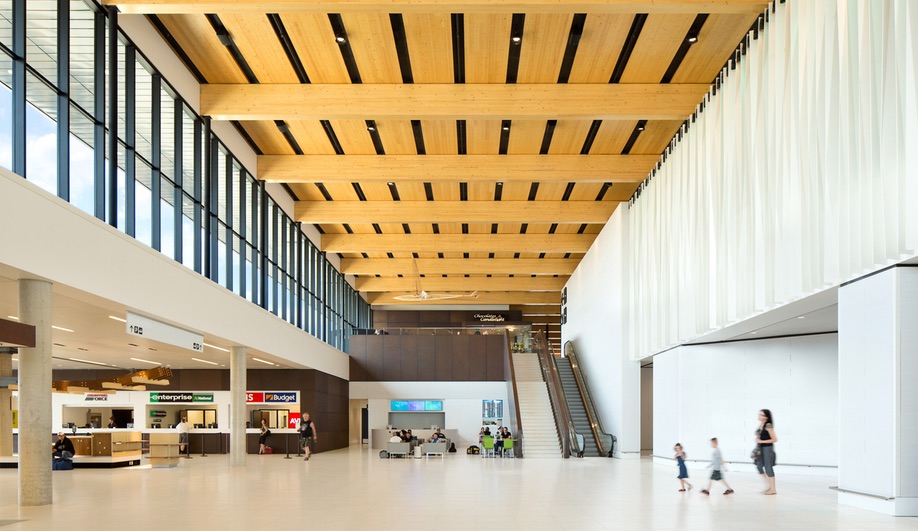 Fort McMurray International Airport’s spacious new terminal was designed by the Office of McFarlane Biggar of Vancouver (known as McFarlane Green Biggar Architecture + Design at the time the project was commenced). The greenfield airport serves one of the most dynamic regions in Canada – the rapidly growing Regional Municipality of Wood Buffalo in Northern Alberta, where the temperature swings from -40ºC in winter to +30ºC in summer.

The terminal is set into a grassy earthwork with ramps at both ends; foot traffic can enter the ground floor directly, while a roadway that ascends the earthwork leads directly to a drop-off zone on the floor above. Extensive glazing is used throughout the building, a gesture that not only lowers lighting costs, but also opens views to the surrounding landscape. This includes a tree-covered park hidden at the rear of the building, tucked below grade, but easily visible from the interior through the baggage claim’s towering windows.

Spread over three storeys, the 15,000-square-metre programme comprises all the functions of an international airport, including check-in and state-of-the-art security screening areas, domestic and international arrivals and departures lounges, hospitality and retail zones, car rental agencies, as well as the airlines’ and airport authority’s offices. But while the site offered the architects a blank slate on which to position each of these functions, it also raised a handful of other challenges.

One was the remoteness of the location itself; not only did construction materials have to be shipped in from other cities, but because the local community scarcely tops 60,000 people, specialized labourers had to be brought in as well. Added to this was an ambition to institute the most efficient sustainable building measures possible in an environment of wild seasonal changes.

To meet these challenges on schedule – and to produce a high-quality result that would require only minimal maintenance in the future – OMB relied heavily on off-site fabrication of the terminal’s components. A durable palette of materials was combined with only the most time-tested technologies. Dark metal siding clads much of the building, with the exception of a long wall adjacent the passenger drop-off, which is subtly pivoted at an angle relative the rest of the structure, and clad in russet panels of weathering steel. Inside, exposed glulam beams and plywood paneling lend the space warmth.

The results are designed to withstand not just Fort McMurray’s harsh winters, but an explosion in its population as well. The region’s proximity to the Alberta oil sands is an important economic driver – one that has not only given the city the nickname of Fort McMoney, but also promises to double the local population by 2030 – and because so many of the new residents come from far and wide, they’re especially frequent fliers. OMB’s terminal ensures the region’s current and future transplants will find a comfortable place waiting when they touch down.

SHARE
Twitter, Facebook, LinkedIn, Pinterest, Email
TAGS
Canada, Infrastructure, Transportation,
AZURE is an independent magazine working to bring you the best in design, architecture and interiors. We rely on advertising revenue to support the creative content on our site. Please consider whitelisting our site in your settings, or pausing your adblocker while stopping by.