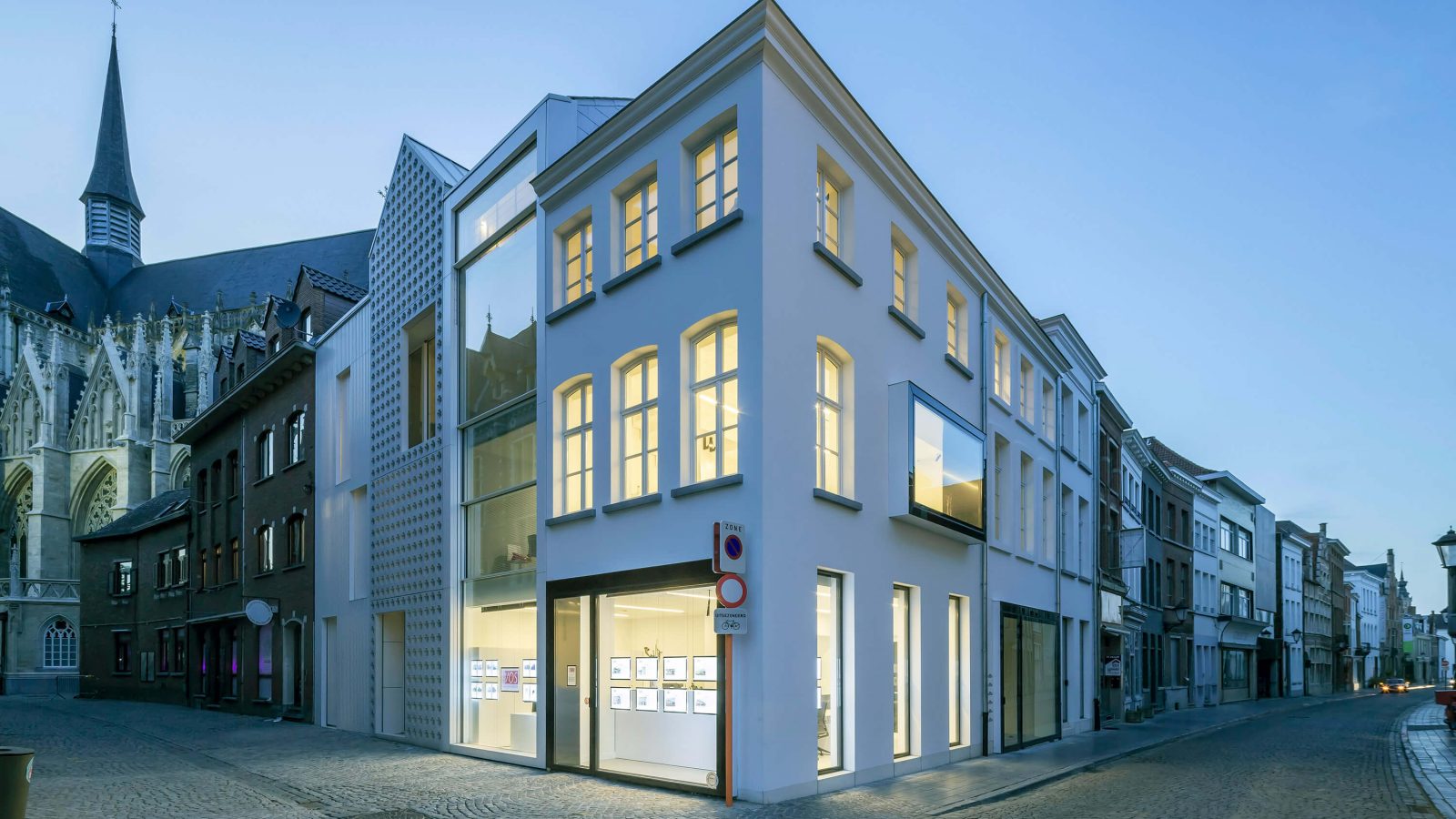 To update the historic complex in Mechelen, Belgium, DMVA Architecten adopted a mix of diverse yet complementary materials

Despite its relatively small components, the House of Lorraine complex came with big expectations. Centrally located in the historic Grote Markt of Mechelen, Belgium, the decaying remains of its six historical houses were purchased by city officials with an eye toward restoration, thereby giving the area a youthful shot in the arm. Of course, the transformation would have to be done in a way that respected its medieval surroundings. To pull this off, the officials brought in a local firm, dmvA architecten.

Initially, a developer had thought of turning the tall and slender residences into a 20-unit boutique hotel. When the developer went bankrupt and the land was acquired by the city, however, it was decided to keep the dwellings separate (five were demolished and rebuilt) but to instill the building, which wraps around a corner of the market, with a greater sense of cohesion. 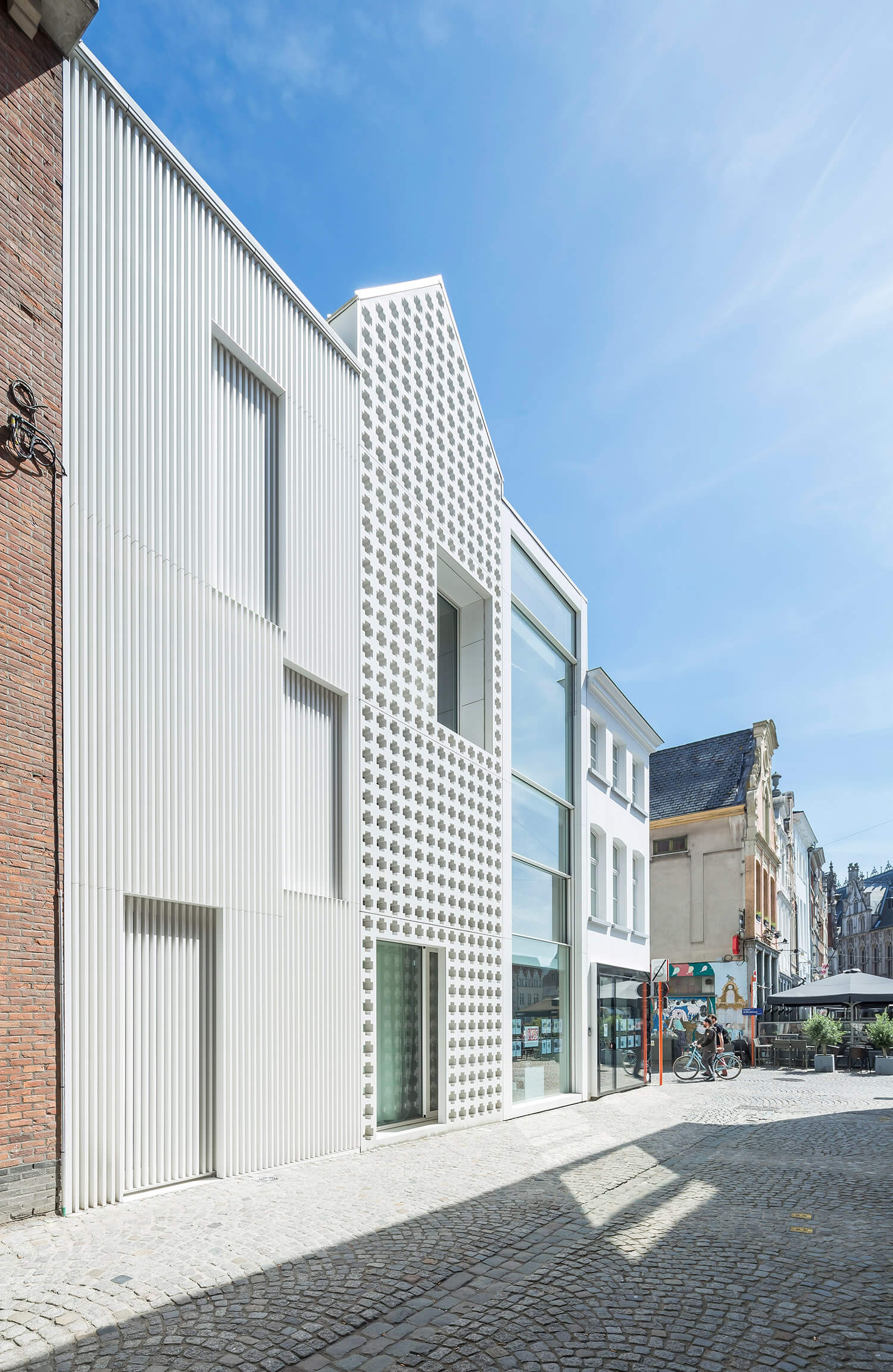 Located in a historic market in Mechelen, Belgium, House of Lorraine flaunts varied facade materials in a pleasingly cohesive manner.

“Our main challenge,” says Tom Verschueren, a co-founding principal of dmvA and one of the project leads, “was designing new residences in a historic and monumental landscape.” Inspiration came with the mandated requirement that the 19th-century white plasterwork on three units be restored: Verschueren and his team used it to drive the overall design, keeping the palette monotone – white only – but using three different materials to give each new facade its own identity. 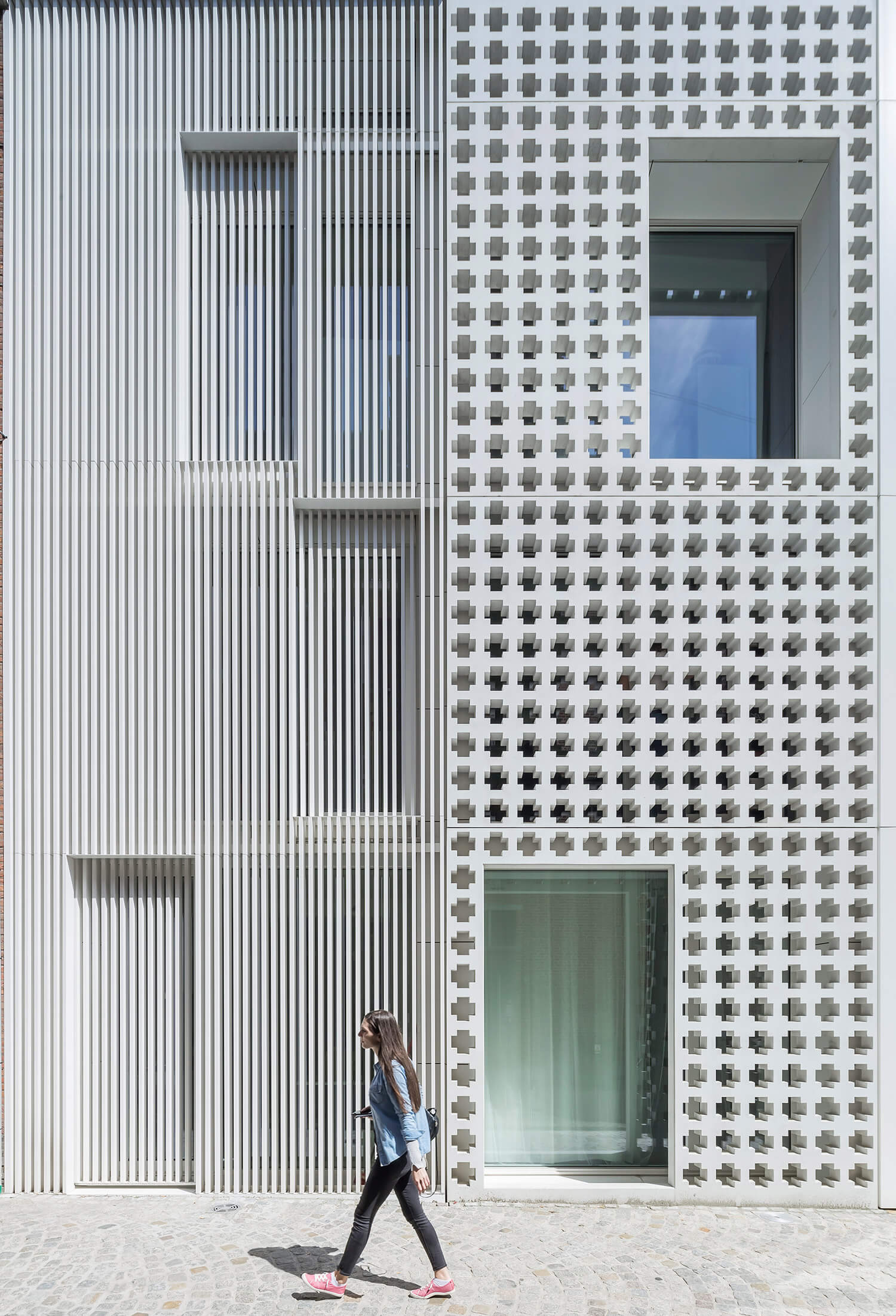 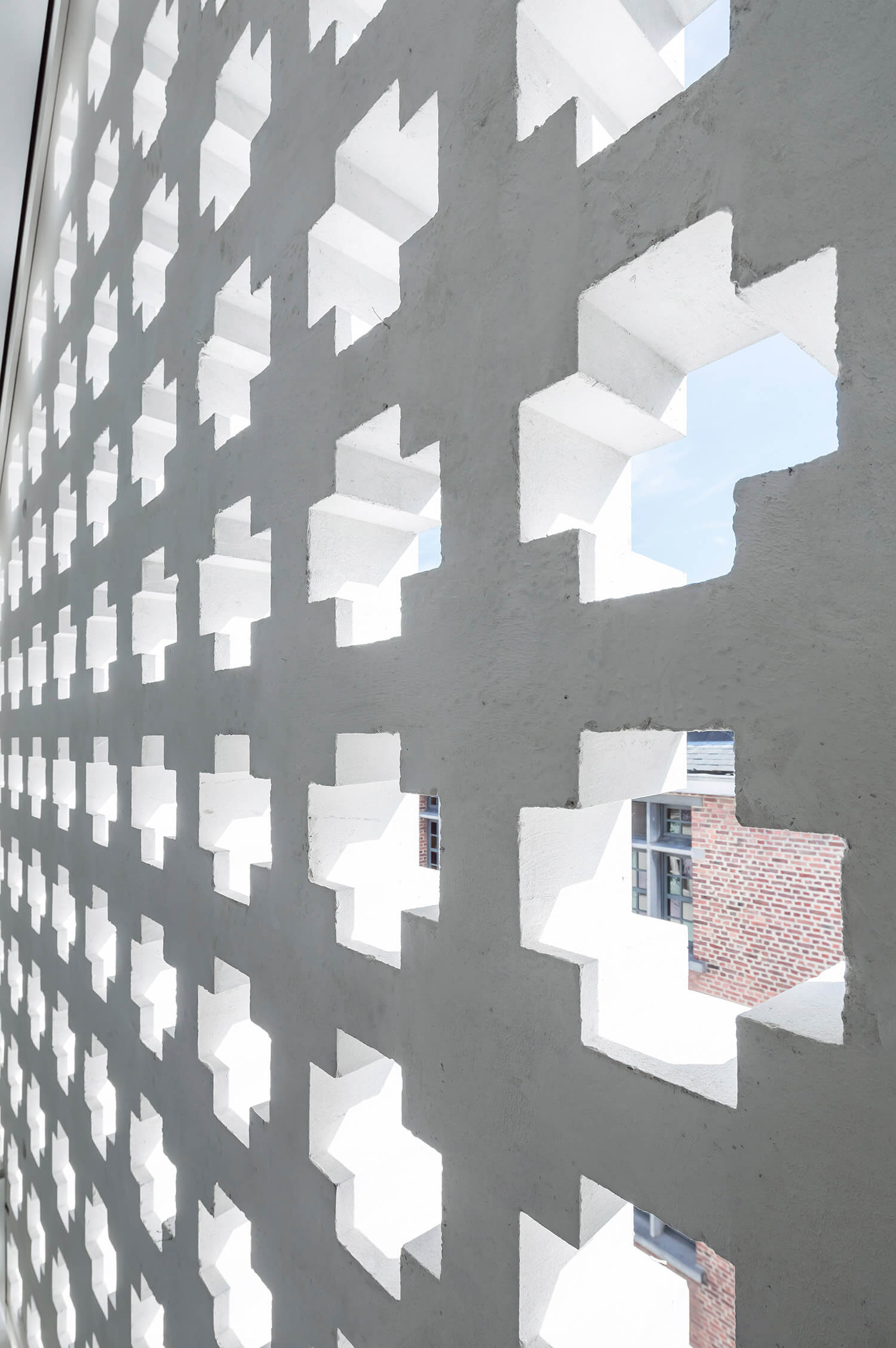 For the first, dmvA installed a double-skin facade – an outer layer of vertical aluminum slats in front of a glazed inner section. Subtle recesses at the windows add dimension to the otherwise flat front, while sliding doors at street level provide access to the interior.

The middle – and most graphic – facade consists of precast concrete panels with cross-shaped cutouts. Approximately 500 of the openings are arranged in a perfect grid and directly reference the detailing found on the historic houses and buildings lining the street and neighbourhood, specifically the Gothic architecture of nearby St. Rumbold’s Cathedral. Both the aluminum slats and the precast concrete panels work as privacy screens and light filters, providing occupants with ample daylight while concealing their lives from the street. 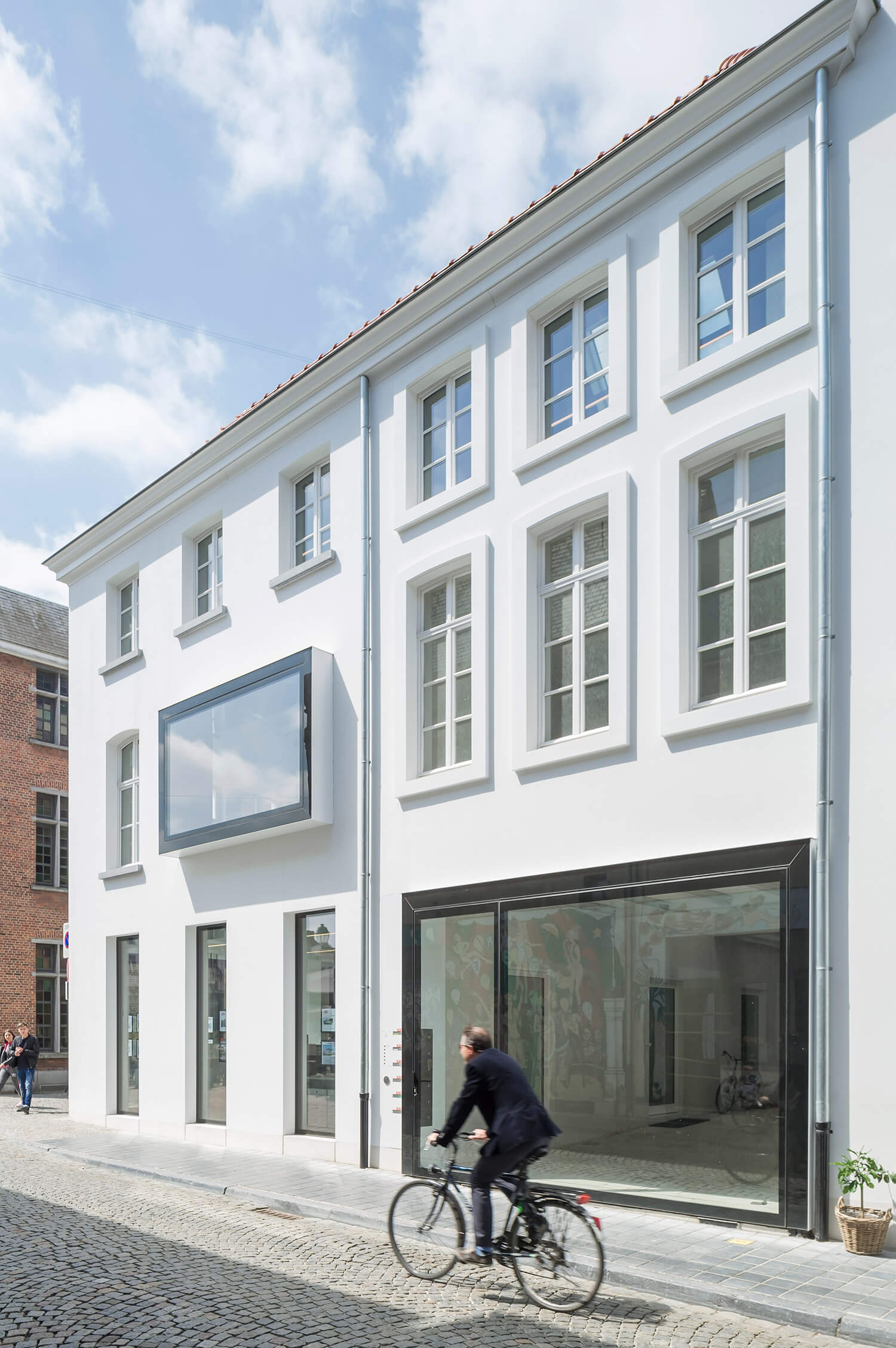 Since the third unit serves as a live-work space, with an office at ground level, the need for privacy was less imperative. Here, dmvA chose full-height glazing to provide a strong connection to the market.

Together with the restored white plaster of the end unit (all of which is office space), the aluminum, concrete and glass elements have a surprisingly even rhythm and pacing – an architectural coup that delivers the requisite hit of energy without obliterating history.  dmva-architecten.be

To update the historic complex in Mechelen, Belgium, DMVA Architecten adopted a mix of diverse yet complementary materials