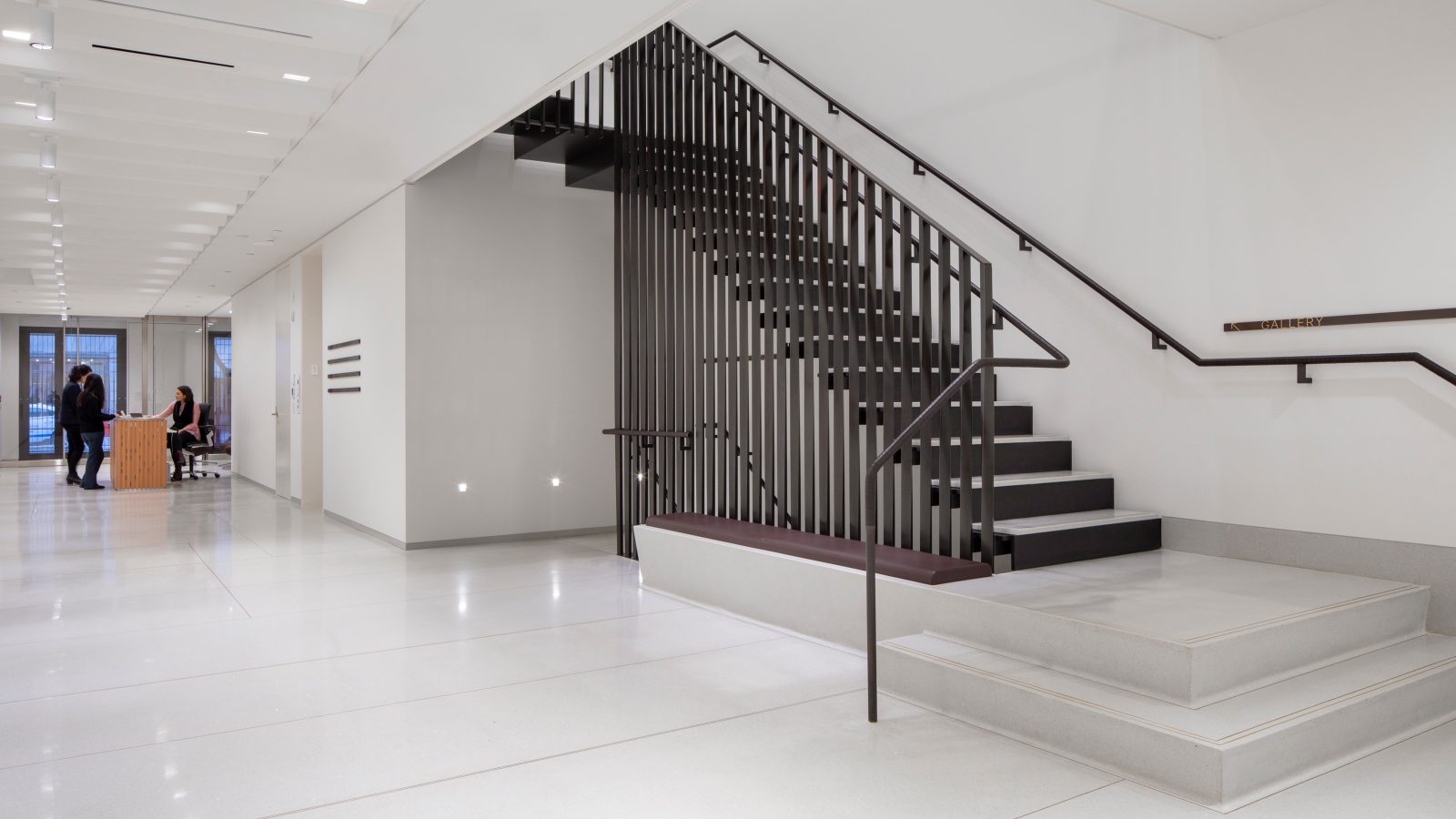 Dedicated to Immigrant Appreciation, the Vilcek Foundation Gets a New Home in Manhattan

The new home of the Vilcek Foundation is an elegant hybrid. But that wasn’t always so.

Nestled tightly into its Upper East Side address, the building was erected in 1919 as a townhouse, then renovated in the 1960s. When Architecture Research Office (ARO) came into the picture to adapt the five-storey building yet again, it encountered a roughed-up gem. The street-facing façade, dating to 1919, was still clad in the original Vermont marble, but somewhere along the way (as the building had been taken over by various art galleries, including Hirschl & Adler, over the past few decades), its entire ground-floor entrance vestibule had been cut out. 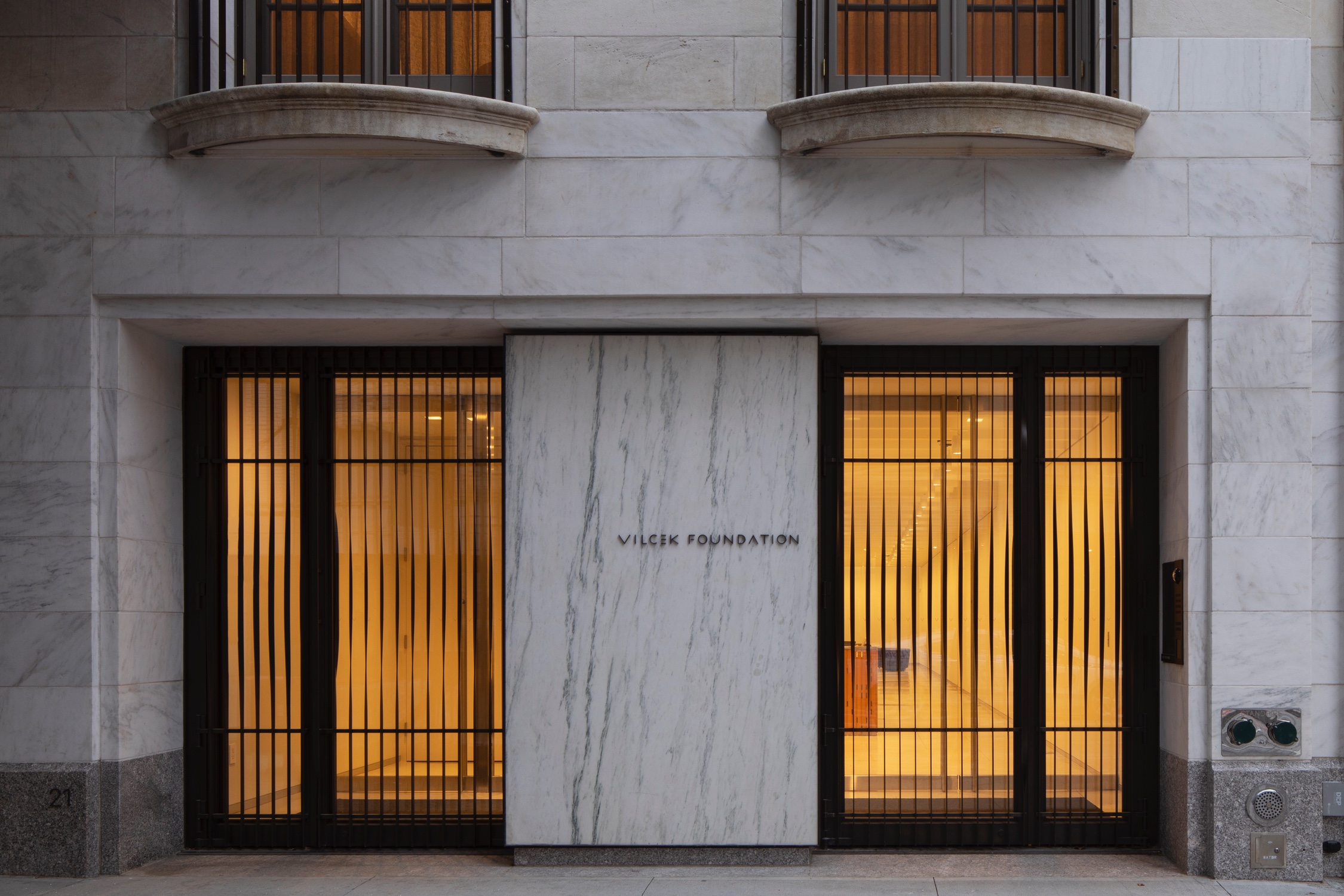 “There was a void the full width of the building,” explains ARO’s Adam Yarinsky. So, they filled the façade in to create an inviting new street-level connection – clad in the same Vermont marble, with its Imperial Danby veining, and featuring bronze-gate doors.

It seems apropos that the Vilcek Foundation should announce its new home by giving back to its surroundings. The organization was founded in 2000 by Jan and Marica Vilcek, two immigrants who defected in the 1960s to New York from the former Czechoslovakia. Jan went on to become a biomedical researcher and Marica was an art historian at the Met. They achieved success but never forgot their humble beginnings.

Through the awards it hands out each year, the Foundation’s mission is to raise awareness of immigrants’ contributions to the U.S. and to foster appreciation of the arts and sciences. This year, the Vilcek Foundation in partnership with the Gold Foundation, is awarding its Humanism in Healthcare prize to Dr. Hanna-Attisha, the pediatrician who blew the whistle on the widespread lead poisoning of children in Flint, Michigan, through the public water supply. 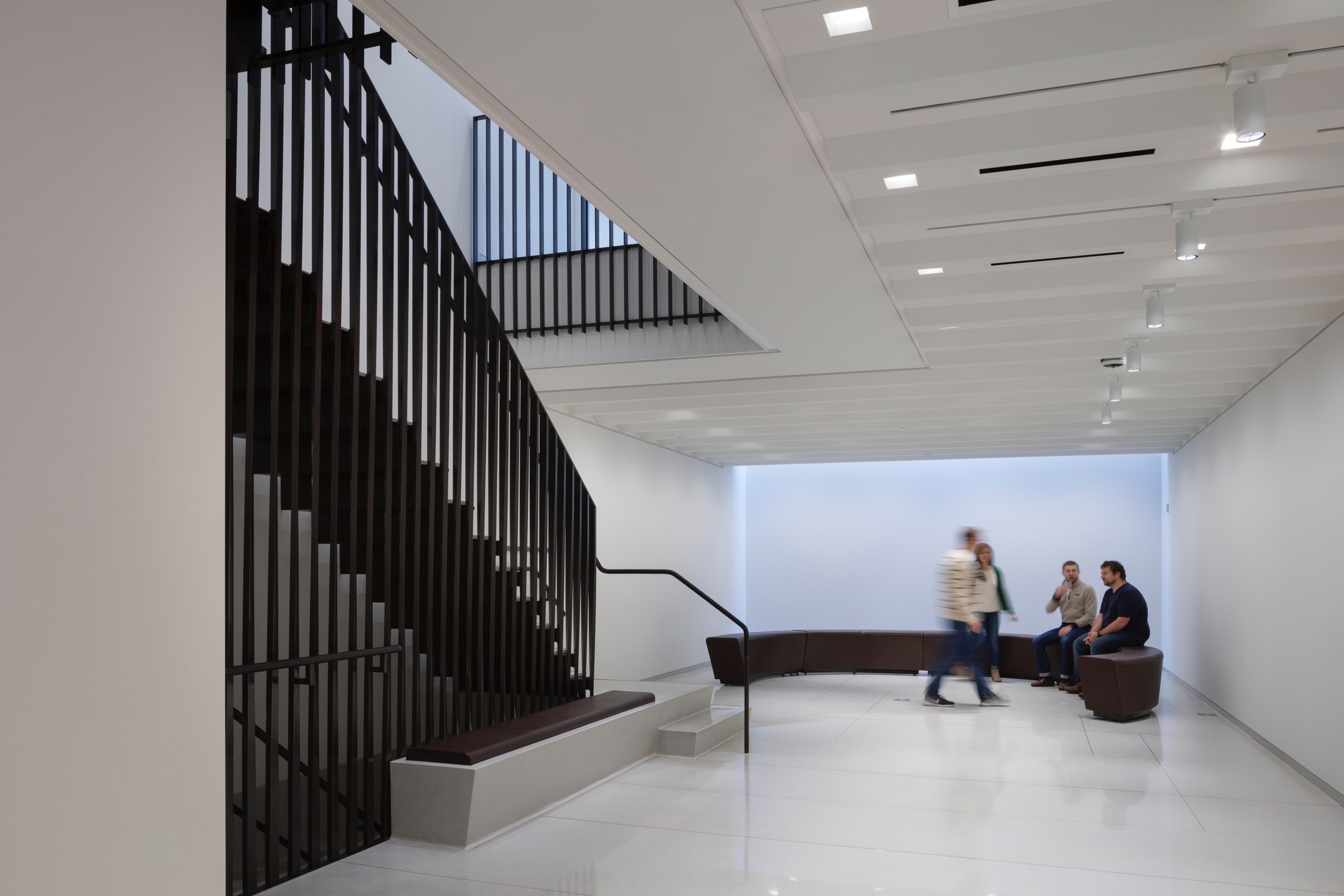 In short, the Foundation does very important work – especially in these immigrant-vilifying times – and deserves an elegant, public-facing home. And ARO has delivered. Enter through the new vestibule, and you are in a warm space, sunlight streaming in through a skylight to accentuate the well-appointed materials, including the Douglas fir reception desk and the terrazzo floor. The first and second floors are home to an art gallery (the Foundation’s first). On show until November is an exhibition dedicated to Ralston Crawford, a Canadian-born photographer and painter, and specifically his Torn Signs and Semana Santa series. It’s well-lit by the custom GFRG ceiling system, which incorporates acoustics and adjustable lighting. 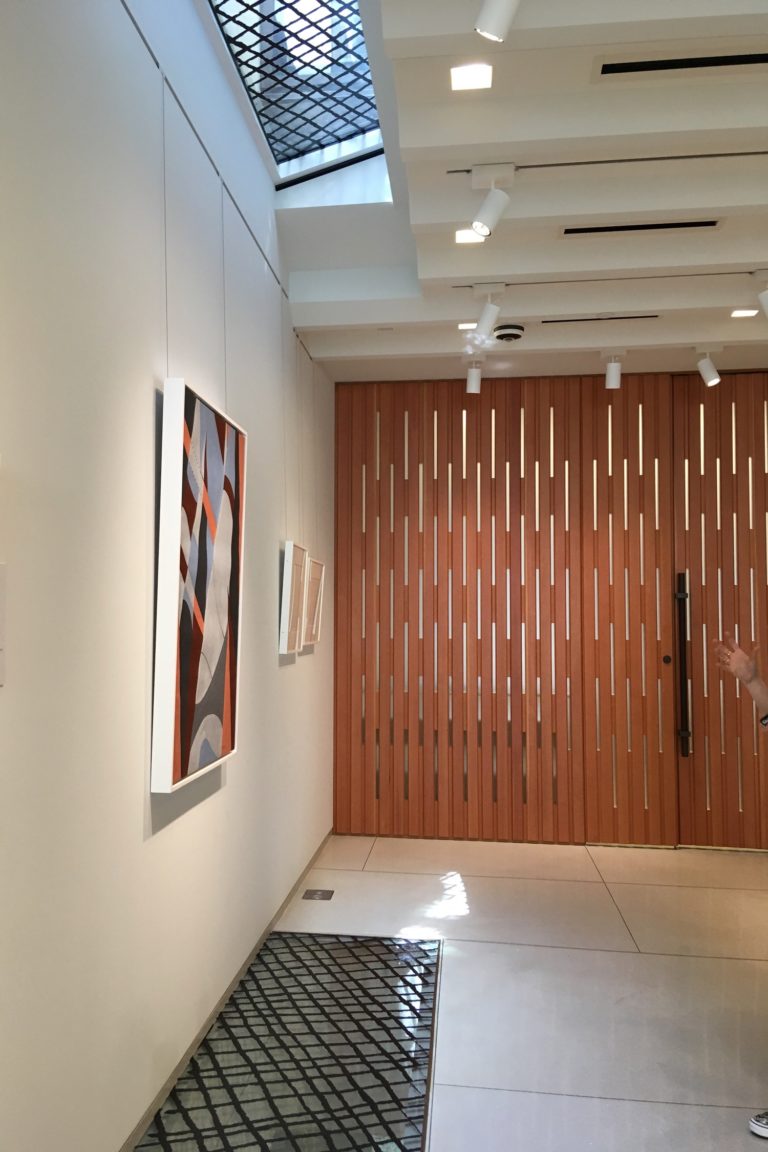 A striking stair is the central focus of the ground floor. Its bronze rails twist from top to bottom, a subtle detail that brings its craftsmanship into focus. “It’s meant to visually activate your perception while you’re walking down,” Yarinsky explains. Haptic perception is also key: the handrail is wrapped in a leather ribbon, effecting a soft corrugated sensation as you run your hand along it. These and other well-edited moments – like the bronze signage designed by Pentagram – feel human-scaled and just right for the building’s townhouse footprint. 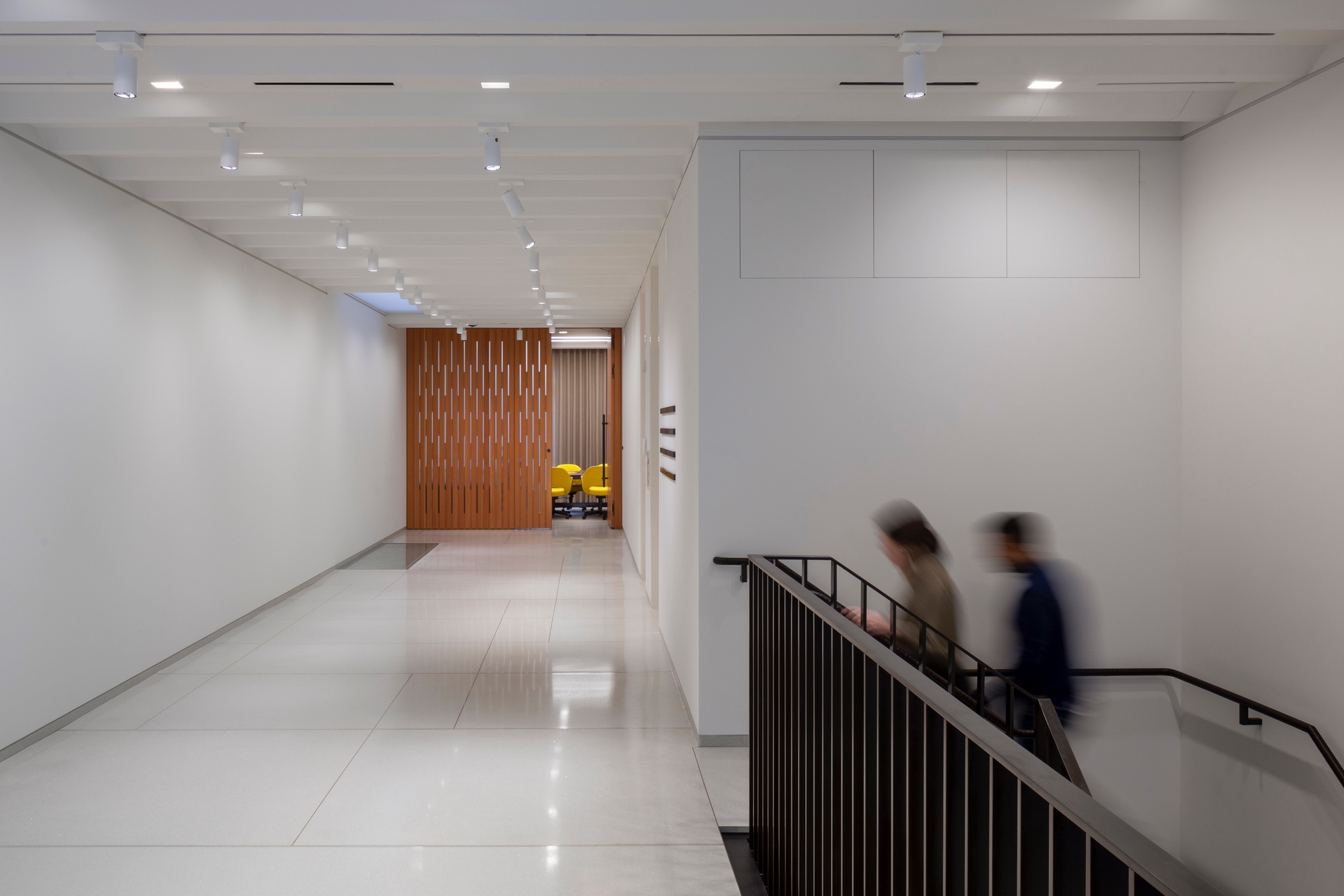 They also point to the care that was taken in making this project special in spite of its spatial logistics. “With the narrow width of a townhouse, a big part of the puzzle is how do you get the elevator and stair in? These are very crucial decisions to maintain quality of space,” says Yarinksy.

The answer was to take as much pleasure in these functions as possible: the fire stair has a gleaming stainless steel railing and vibrantly hued walls on every level, and the elevator’s backsplash features chevrons that are LED-lit to point up or down depending on your direction. 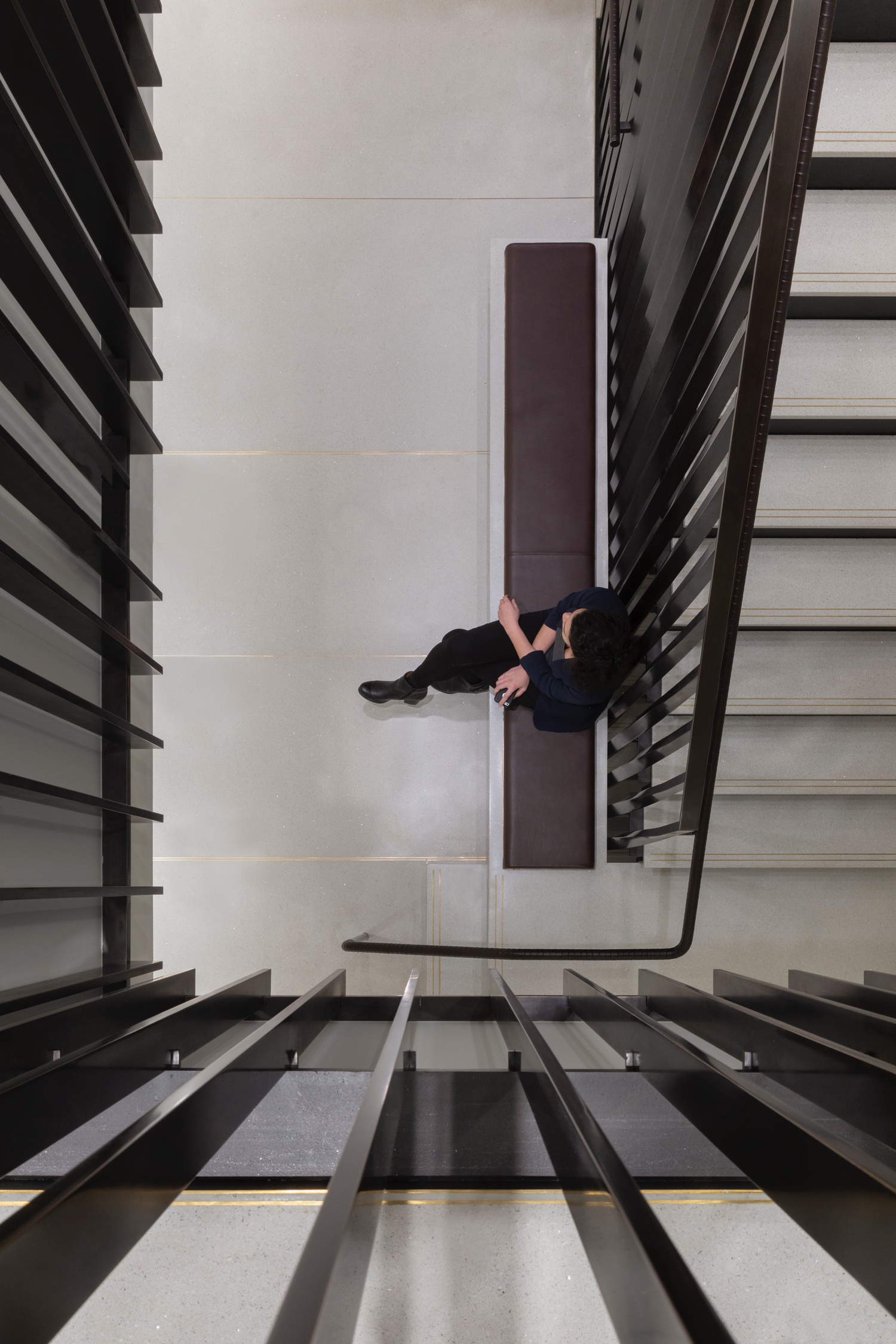 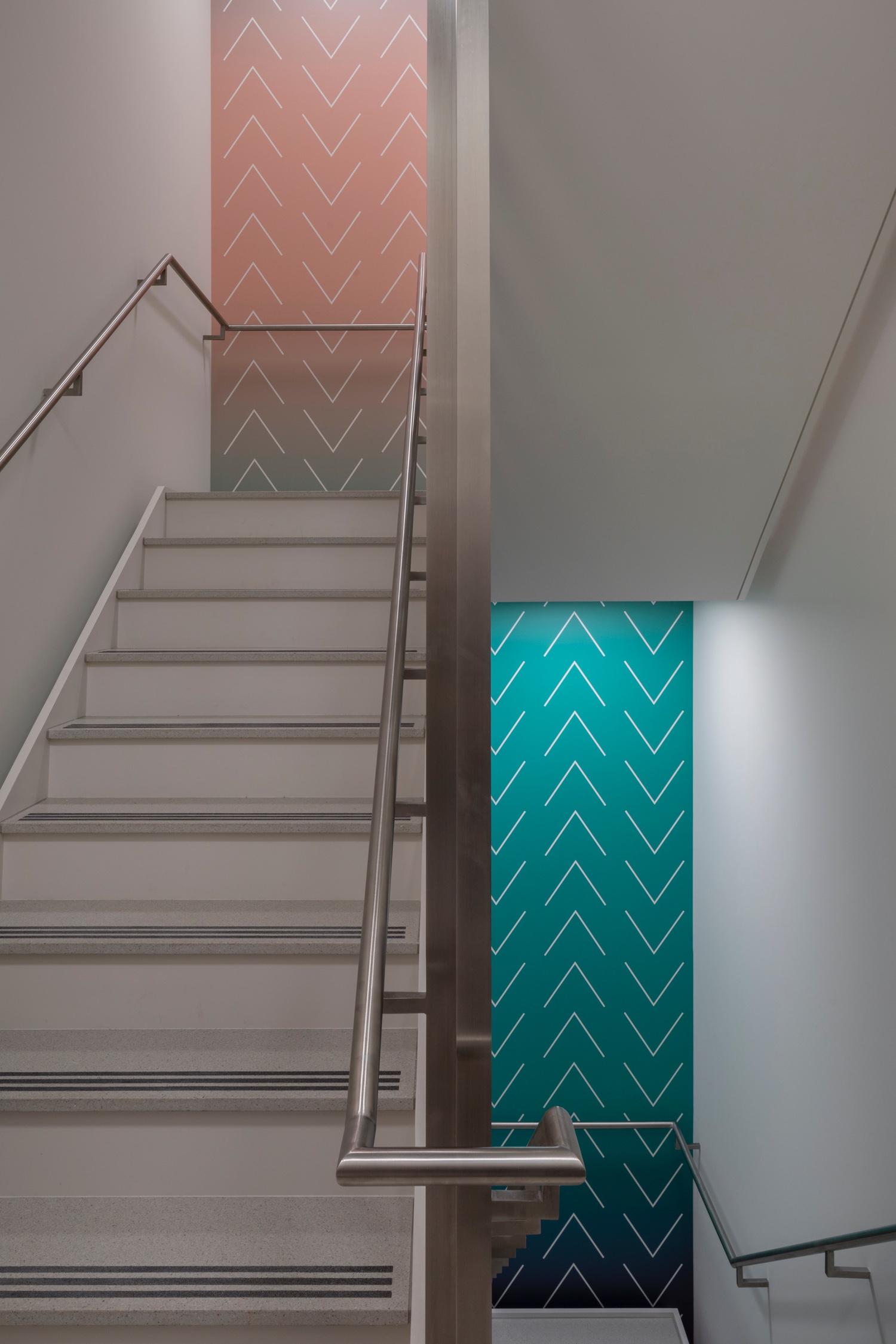 Of course, the architects also worked cozy office space into the building. The boardroom on the second floor is enclosed behind a wall of Douglas fir with translucent resin inserts that allow light to permeate. The third and fourth floors carve out space for up to 12 employees by the judicious use of Douglas fir panels as partitions and storage elements – such as gorgeous bookcases. The Vilceks’ art collections, newly gifted to the Foundation, are highlighted throughout. 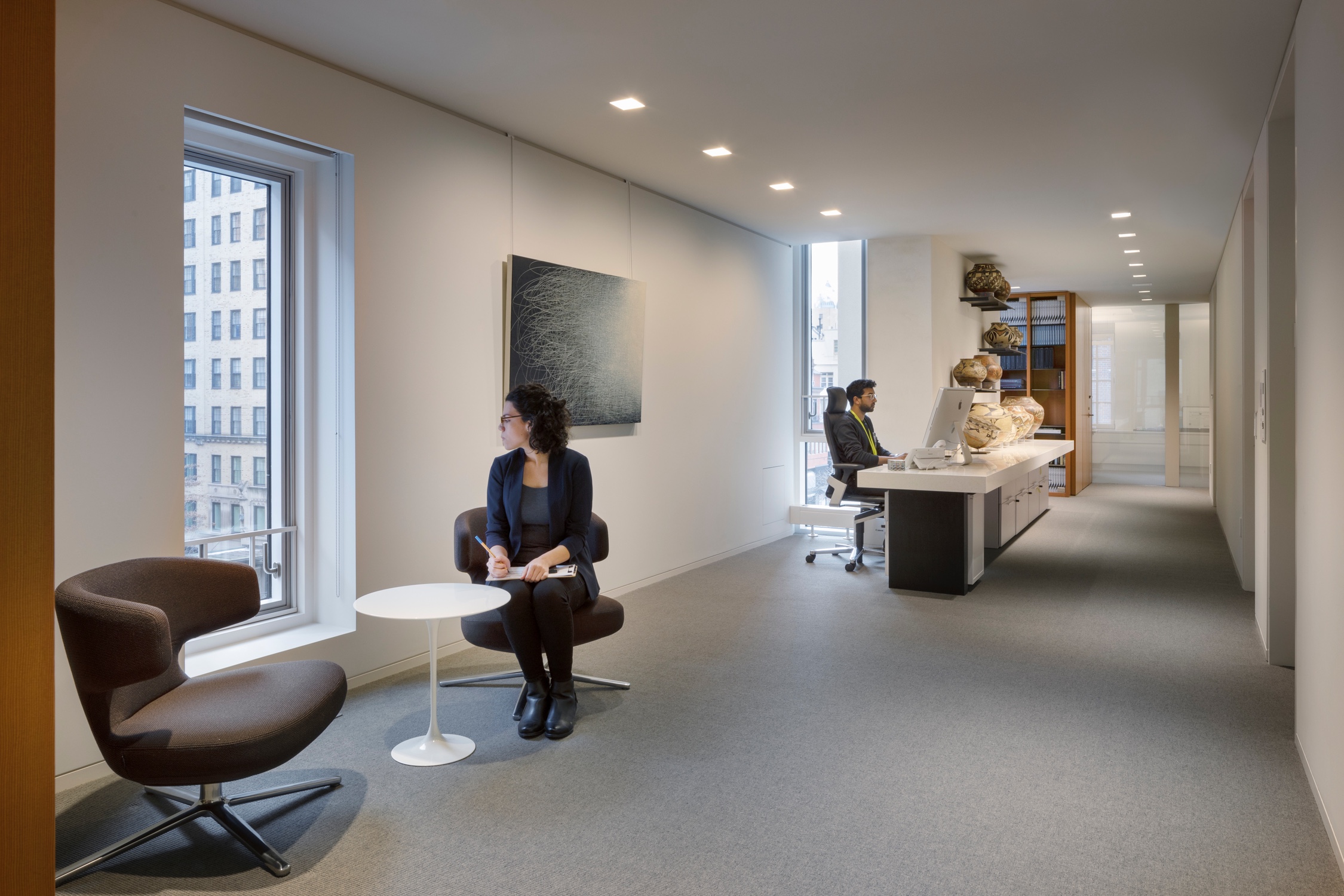 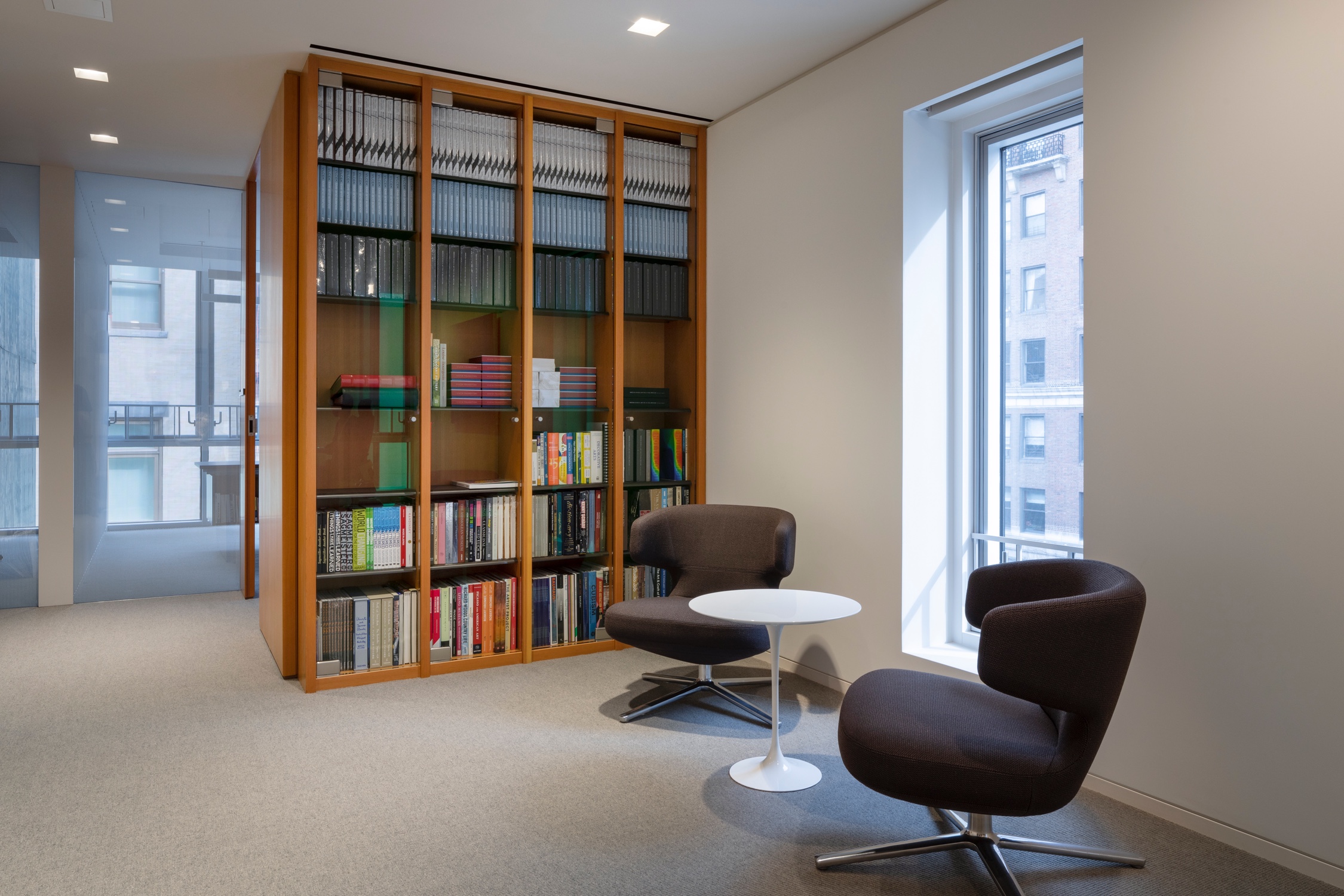 And these spaces also enjoy sunlight from the new curtain wall that wraps the back of the building – a nod to the glazing that was added to the building in the 1960s. So, the building is now a hybrid in the best way: 20th-century-traditional in the front, mid-century-modern in the back – and wonderfully detailed inside. 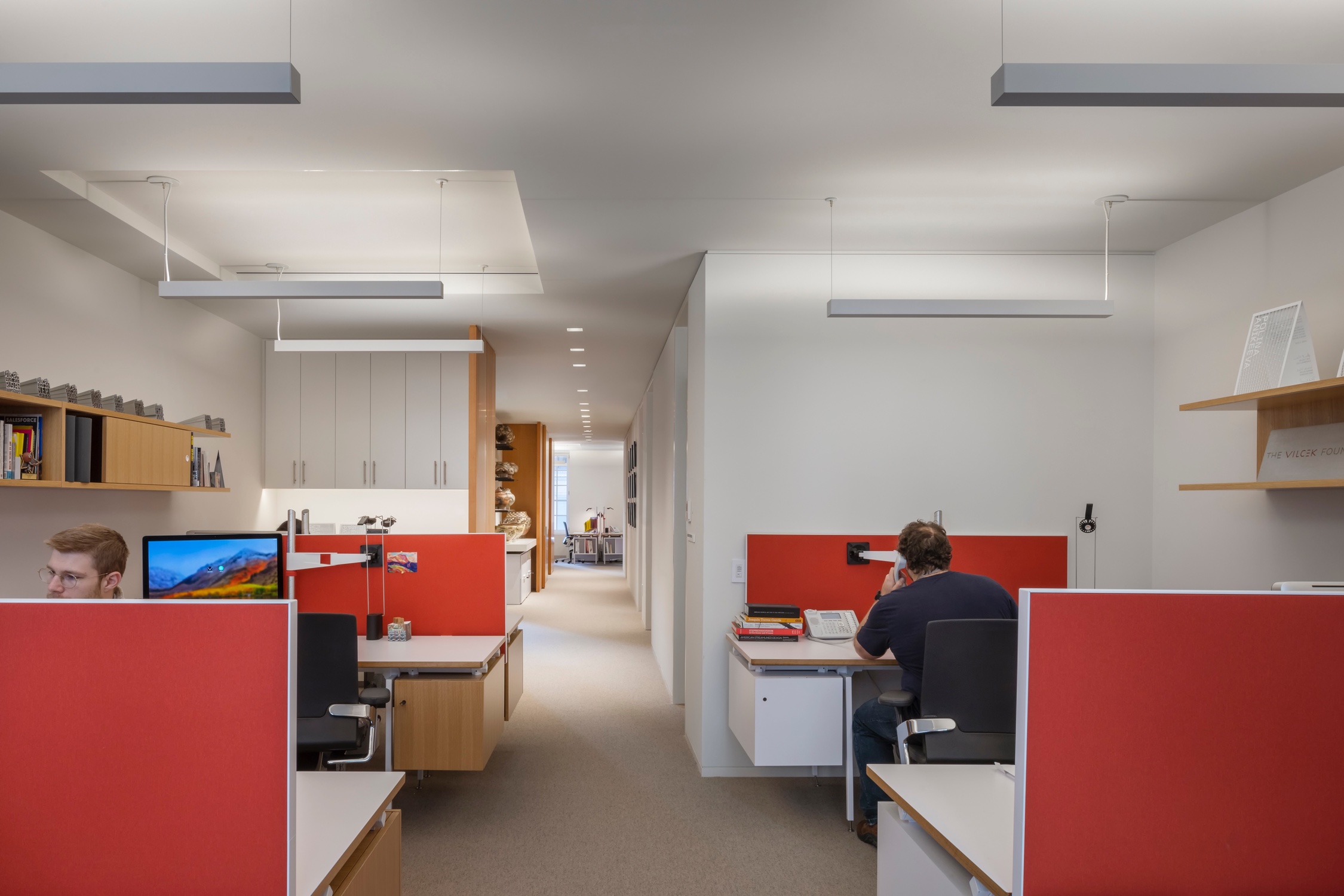