Save energy and get closer to achieving Carbon Neutrality
Populous Creates a Distinctly Urban Home for English Football’s Spurs
London's Tottenham Hotspur Football Club settles into an engaging new stadium that makes the crowd and the community an integral part of the spectacle. 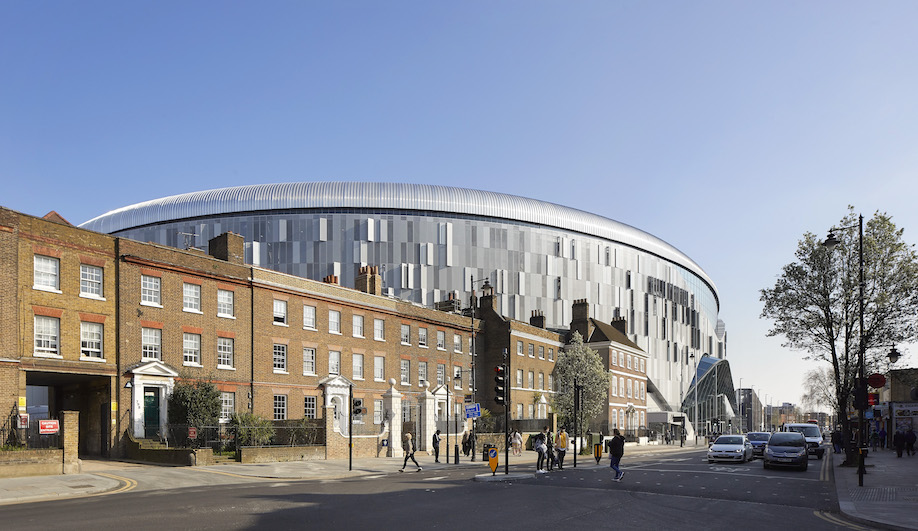 “People describe stadiums as cathedrals of the 21st century, but I think of them more like town halls,” says Populous‘s Christopher Lee. According to the architect, this democratic ethos is embodied by the newly completed Tottenham Hotspur Stadium, which offers a much expanded new home for the storied North London club. Opened in April, the visually striking facility fosters a spirited atmosphere while introducing a tactful and distinctly urban presence to the borough of Haringey. 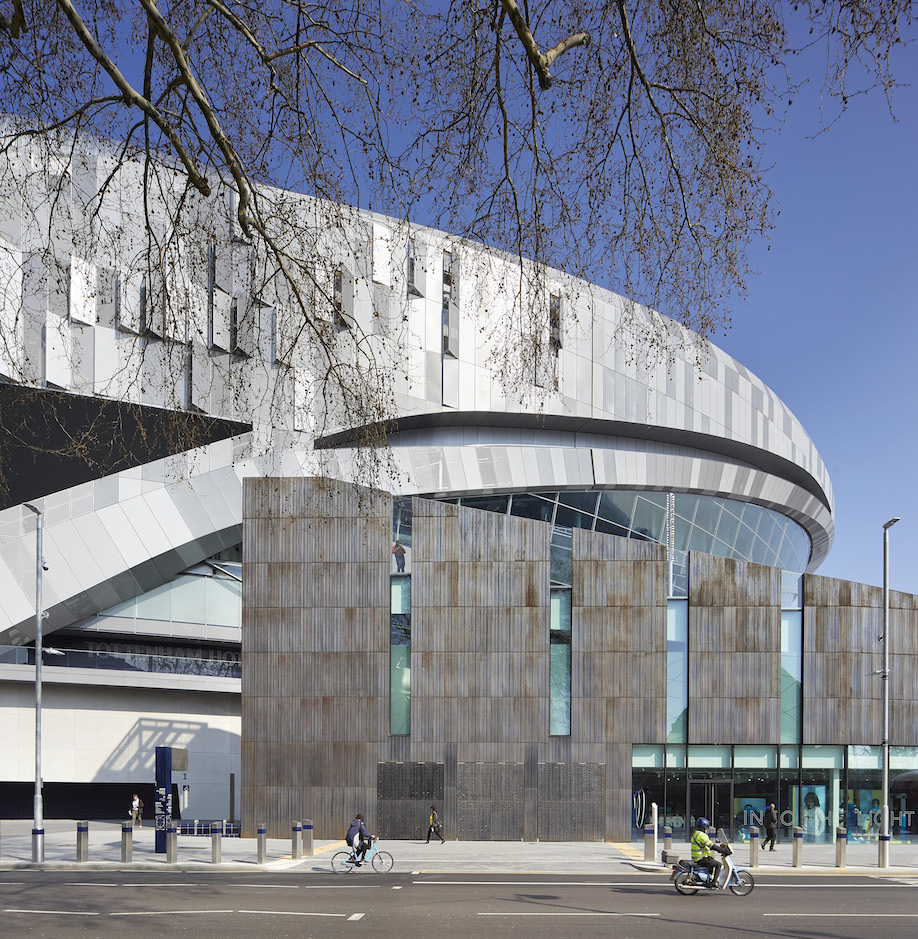 Sitting on the site of the club’s former White Hart Lane home ground, the 62,000-seat stadium replaces its much smaller predecessor with an ambitious complex that introduces a boldly declarative contemporary style with conscientious sensitivity to its urban surroundings. Drawing the eye from a distance, the metallic body of the ultra-modern stadium bowl is smartly paired with a contextually attuned new street wall. 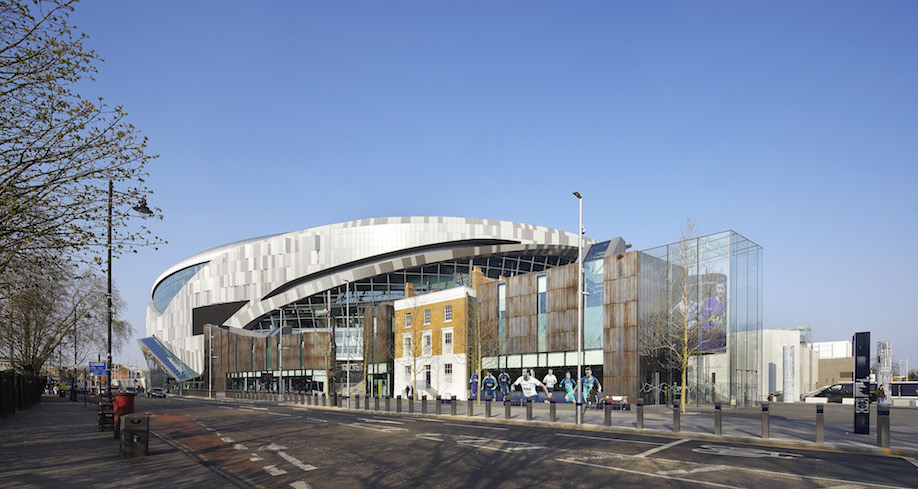 Facing the Tottenham High Road, a CNC-cut cast-iron facade picks up on the scale of its 19th-century surroundings while complementing the sleek body of the stadium with a more tactile, textured presence. Bookending the stadium, the glass and cast-iron form picks up on the curvature of the cladding above, translating a subtle kinetic energy down to street level. Integrated into the structure, the restored Warmington House is prominently highlighted, with the more muted cast-iron facade set back slightly from the historic frontage. 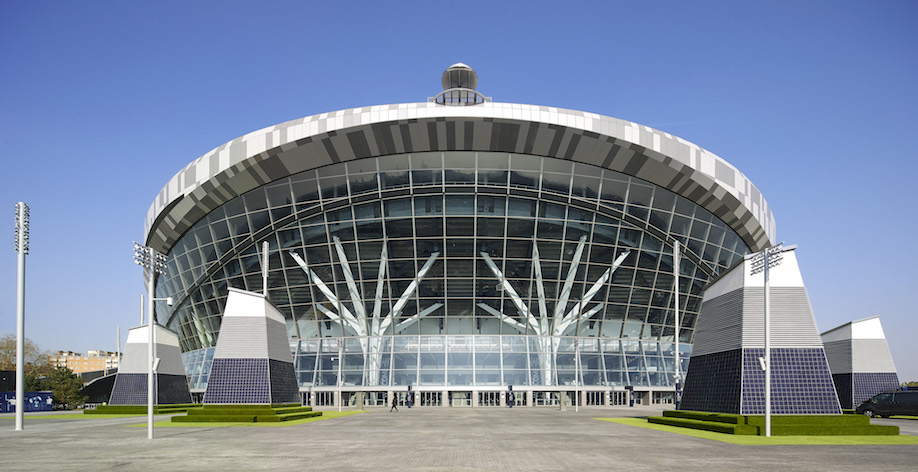 The engaging new High Road addition replaces the former stadium’s tired row of garage-door retail spaces with a much more urban model, soon to be home to the new team shop and museum. To the east, a stretch of surface parking has made way for a new public space, with a sizeable plaza now fronting the south stand. 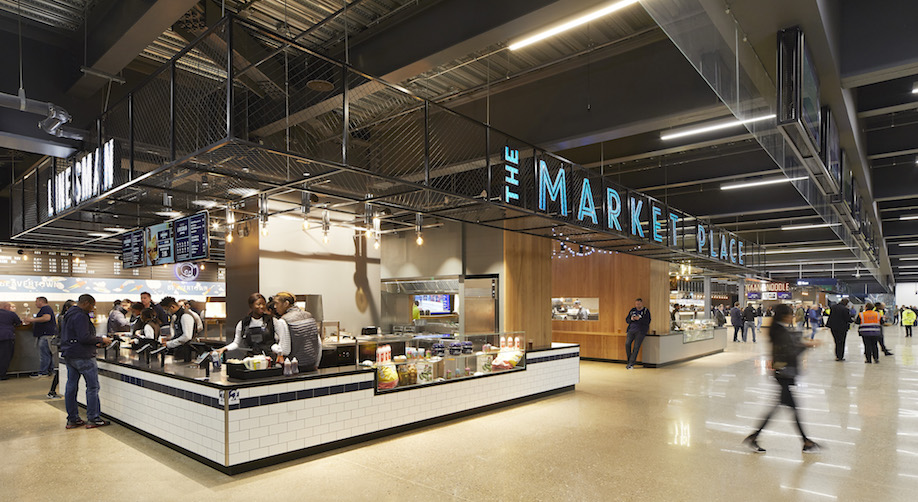 Inside, the amenity-rich stadium features a market-style concession program, complete with a marquee 65-metre-long bar that runs the full length of the goal line. Wood tones and black and white tiles create a refined but unfussy atmosphere. 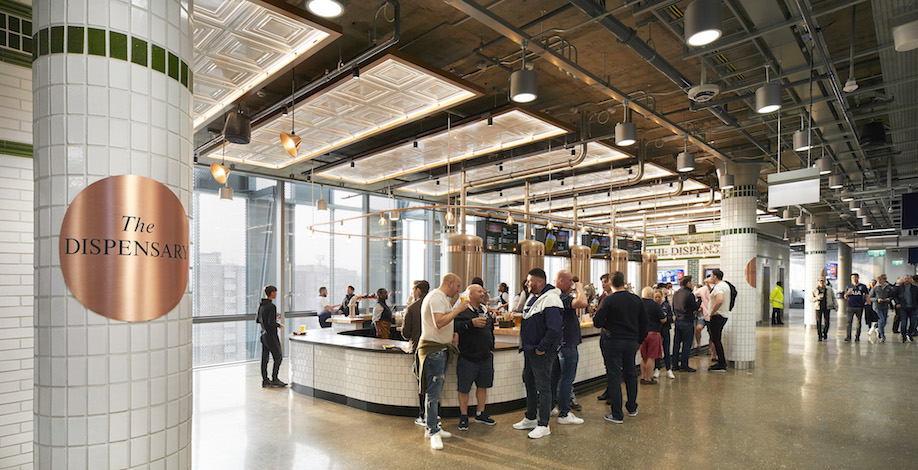 Framing the pitch, Tottenham Stadium is designed to foster an intense and noisy atmosphere. Putting spectators as close to the action as possible, seating at the front of the south stand situates fans less than five metres away from the goal line – closer than in any other Premier League stadium. Stands are also pitched forward at 35 degrees, intensifying the viewer experience. Taking inspiration from concert hall acoustics, the stadium bowl is engineered to enhance the din of the crowd, creating a “wall of noise” that crescendos at the 17,500-seat “home end.” 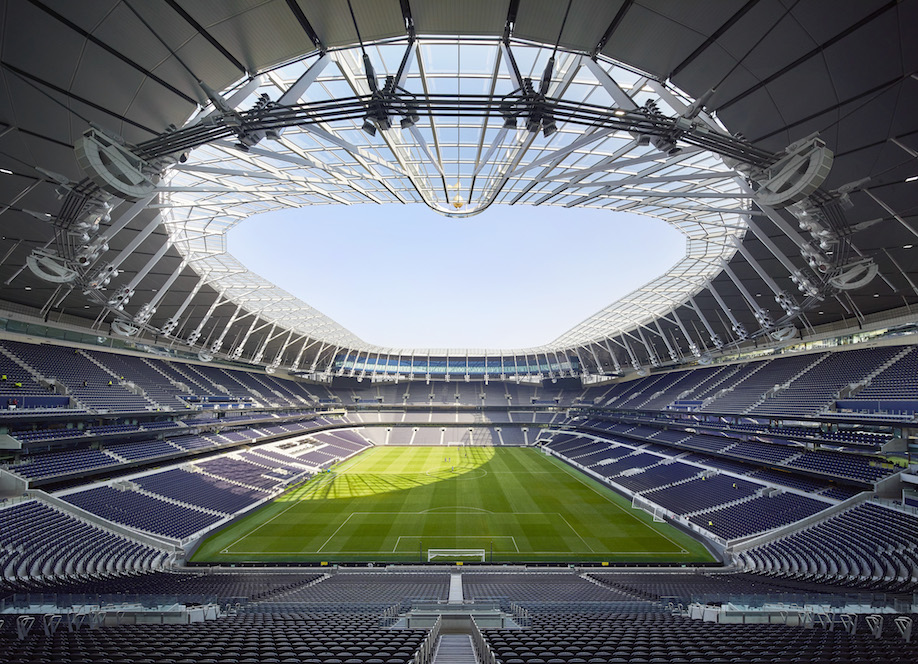 Belying Tottenham Stadium’s tightly packed configuration, the natural grass soccer pitch is fully retractable, with an artificial playing surface – specified for NFL games – beneath it. It’s an impressive feat of engineering and one that also allows the facility to easily host concerts and events on the artificial surface.

While the match day experience is certainly the main draw, the complex’s attention to its urban surroundings is arguably more impressive. As part of the project, the club has added 258 new affordable homes to the stadium complex, as well a pair of schools, a supermarket, a gym and shops, with retail and education uses clustered at the north end of the stadium. 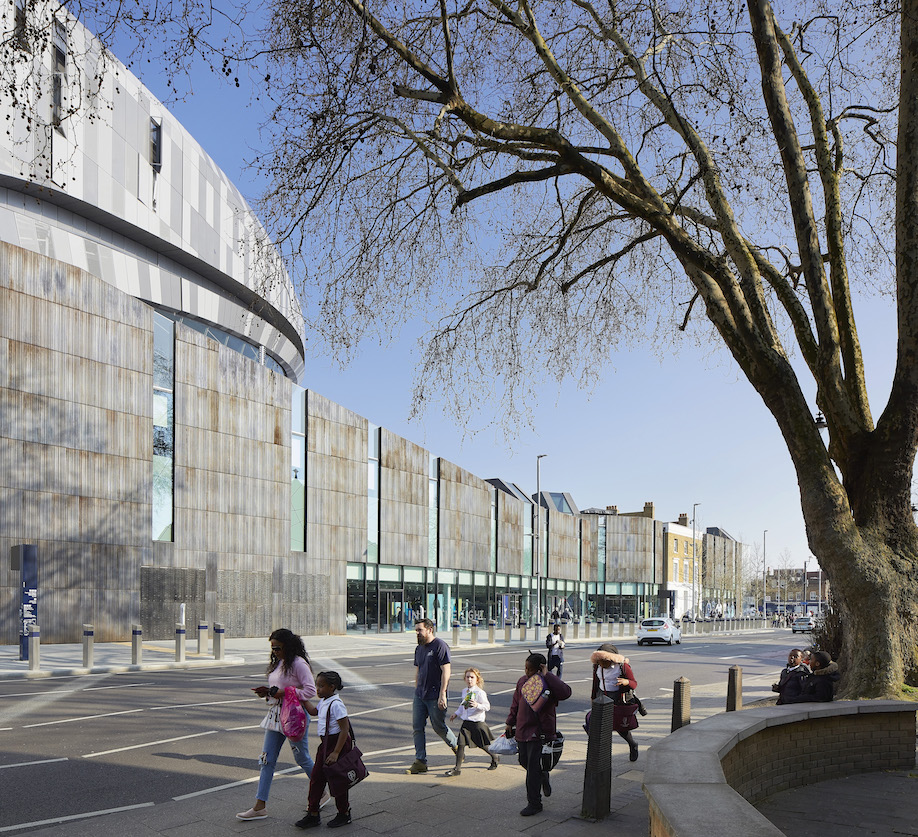 Overall, Populous has demonstrated that a major 21st-century sports complex needn’t be a looming imposition on its surroundings. Stadiums “should be somewhere that local people can use and engage with all year round, not these huge spaces that are locked down after a match day,” says Lee. It’s a paradigm that more sports teams ought to follow.

SHARE
Twitter, Facebook, LinkedIn, Pinterest, Email
TAGS
Architecture, Urbanism,
AZURE is an independent magazine working to bring you the best in design, architecture and interiors. We rely on advertising revenue to support the creative content on our site. Please consider whitelisting our site in your settings, or pausing your adblocker while stopping by.