Save energy and get closer to achieving Carbon Neutrality
Shinola Hotel Creates a Living Room in Downtown Detroit
In the heart of Detroit, an adaptive reuse project by Studio Gachot revives a historic stretch with restaurants, retail, and a boutique hotel. 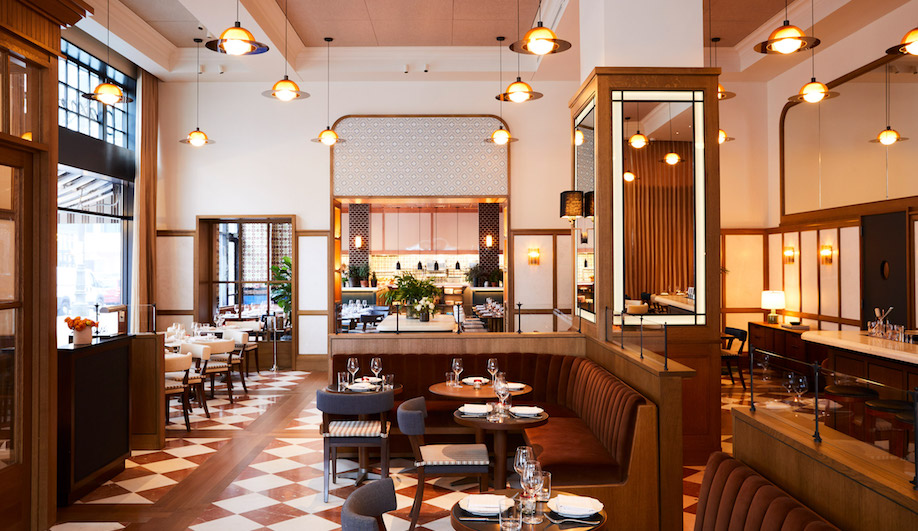 Since its founding in 2011, Detroit’s Shinola brand has quickly expanded its footprint, with flagship stores established across North America – and in London – to display the watch and leather-goods manufacturer’s high-end products less than a decade later. This year, the luxury retailer intensified its presence in Detroit, with the opening of the Shinola Hotel on one of the city’s prime commercial streets, Woodward Avenue. Combining a 129-room hotel with new street-level retail and a variety of new restaurants and cafes, the ambitious adaptive reuse project touts itself as “Detroit’s new living room.” 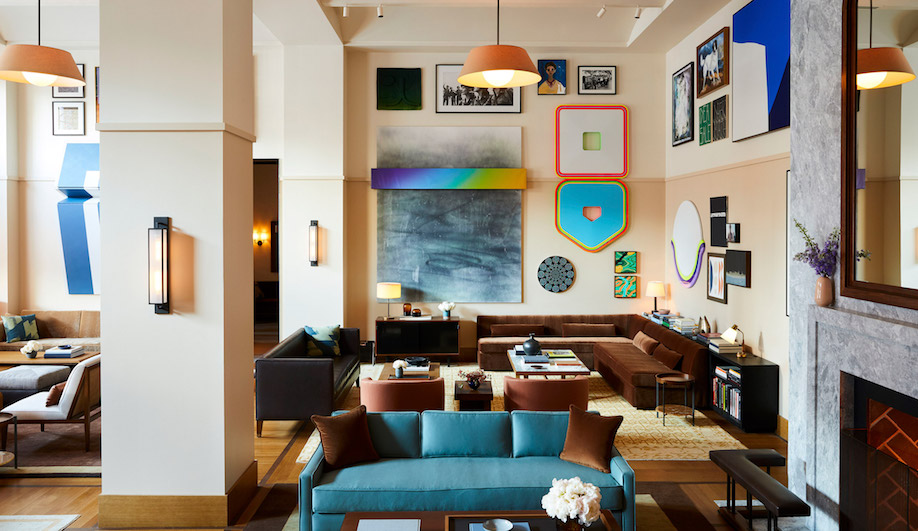 Designed by New York’s Gachot Studios with Detroit’s Kraemer Design Group, Shinola Detroit rehabilitates the 10-storey terra cotta-clad building at the corner of Woodward and Grand River Avenue, with a combination of smaller adaptive reuse components and new construction filling out the site. Dating to 1915, the TB Rayl Company building is now the centrepiece of a mixed-use urban hub. Here, the eclectic hotel lobby epitomizes the promised “living room” experience. 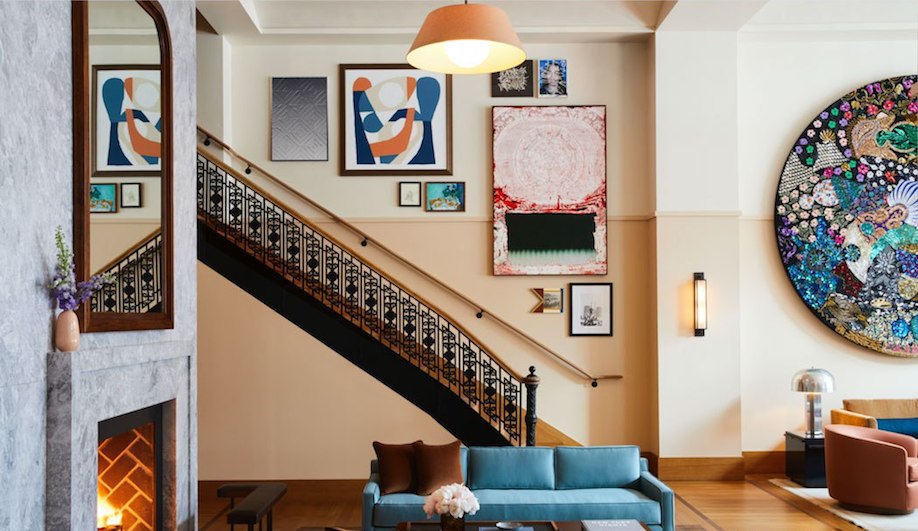 Warm lighting, wood tones, and deftly restored heritage elements — including a marquee staircase with an elaborate metalwork bannister – create a simple and comfortable backdrop for the rich array of furniture and artwork. Much of the furniture was custom-designed by Gachot Studios, with a combination of colours and textures used to create an informal atmosphere, punctuated by slightly rustic notes. Curated by Detroit’s Library Street Collective, the art program features a variety of styles, with a sense of fullness and enthusiasm underscored across the walls, where art reaches almost to the ceiling. In effect, the designers have created a space that maintains a sense of cohesion amidst the spectrum of playful accents. 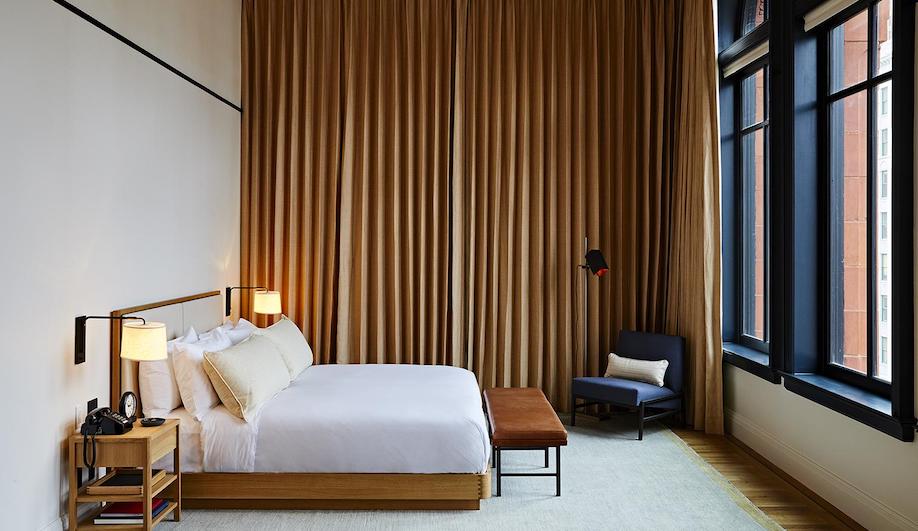 The guest rooms display a more pared down – and restful – ambiance, allowing the building’s expansive curved windows to draw the eye. Shinola’s own products – like the Runwell Desk Clock – are interspersed throughout, asserting the brand’s slightly rugged, quasi-industrial identity, in spaces that work to complement this aesthetic. A number of Shinola products were also designed exclusively for the hotel, including the striped alpaca throw blankets spread across many of the beds. 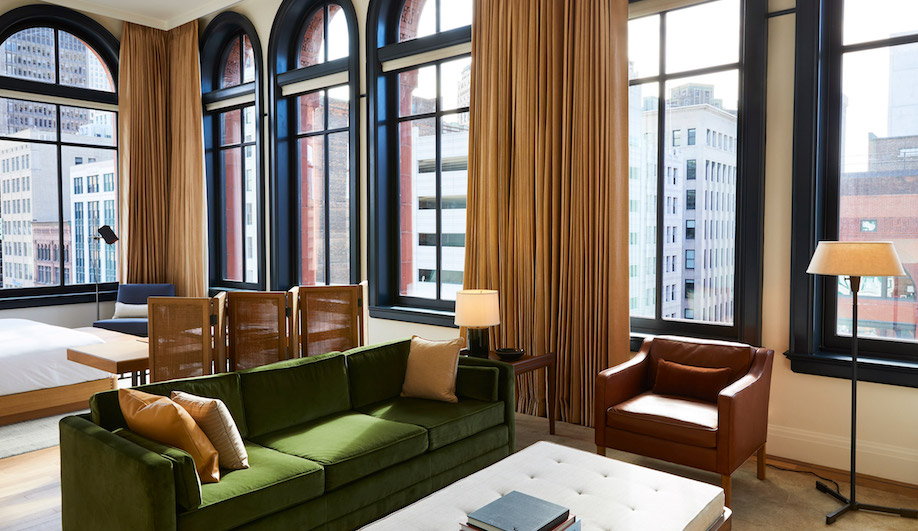 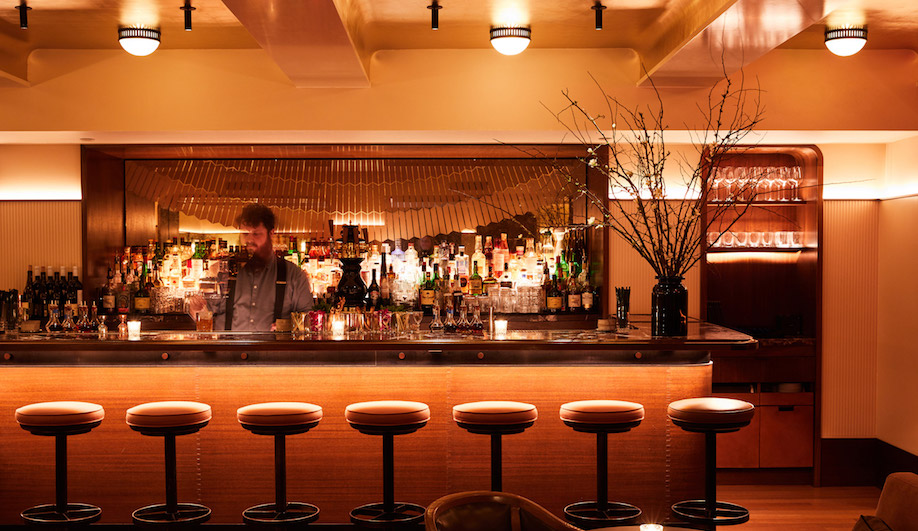 Deftly combining an assortment of retail and dining experiences with a boutique hotel, the mixed-use program and playfully elevated design makes the Shinola Hotel an attractive destination. While the decidedly high-end offerings make the moniker of “Detroit’s new living room” a politically prickly proposition, the hotel offers an attractive and welcoming space with the comforts of home.

*this article was amended to reflect the fact the Library Street Collective curated the art collection at Shinola Hotel, not Bedrock as initially stated.

SHARE
Twitter, Facebook, LinkedIn, Pinterest, Email
TAGS
Hospitality,
AZURE is an independent magazine working to bring you the best in design, architecture and interiors. We rely on advertising revenue to support the creative content on our site. Please consider whitelisting our site in your settings, or pausing your adblocker while stopping by.