Save energy and get closer to achieving Carbon Neutrality
The Best Furniture Fabricators For Built-Ins
Studio Modijefsky enlists Holland’s Fiction Factory to craft vibrant seating for a restaurant, while IBI Group collaborates with Eventscape on an office for Capital One 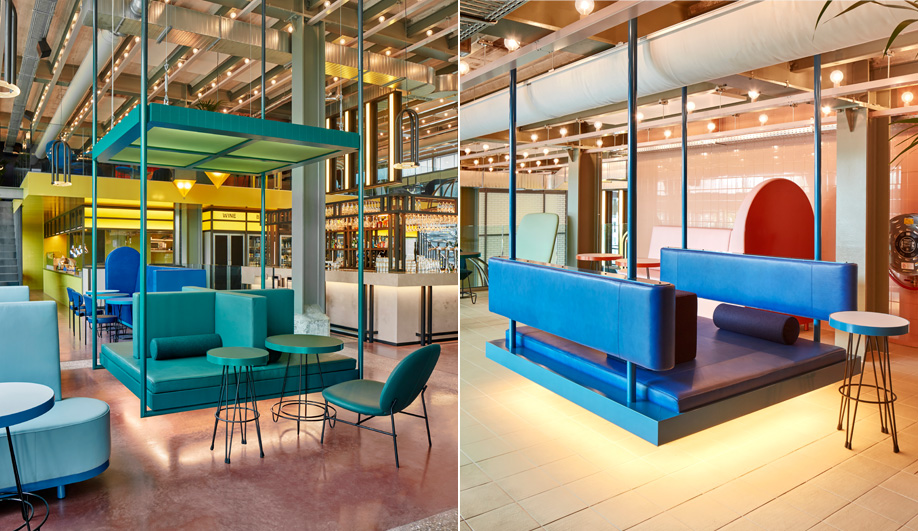 For a restaurant in a former ceramics plant in Maastricht, the Netherlands, Studio Modijefsky enlisted Holland’s Fiction Factory to devise dynamic, space-defining seating.

The Dutch aren’t afraid of colour. For proof of this, consider the vibrant custom interior of the Commons, a three-level restaurant, bar and event space that Studio Modijefsky of Amsterdam designed for the Student Hotel, a stay-work-meet space geared to university kids and tourists, in Maastricht. The Student Hotel is located inside the Eiffel, a so-called “horizontal skyscraper” distinguished by its 183-metre-long span. Formerly the home of the equally celebrated Sphinx ceramics factory, the setting served as a big source of inspiration for the new 975-square-metre facility, which is situated in the building’s northeast addition, constructed out of steel. 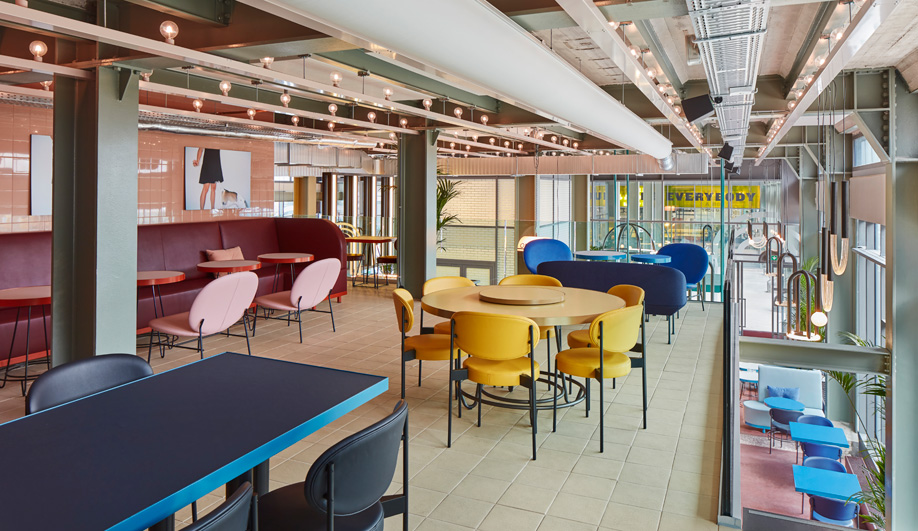 The rounded shapes of the hotel’s custom-made tables, for instance, evoke both spinning pottery wheels and stacked clay vessels; the leather daybeds are suspended on metal rails in a nod to the elevators that serve as vertical connectors in the “overturned” monolith. Even the palette, rendered across the three storeys in both soft pastels and bolder hues, evokes the colours associated with the making of ceramics, from unbaked clay to various glazed finishes. 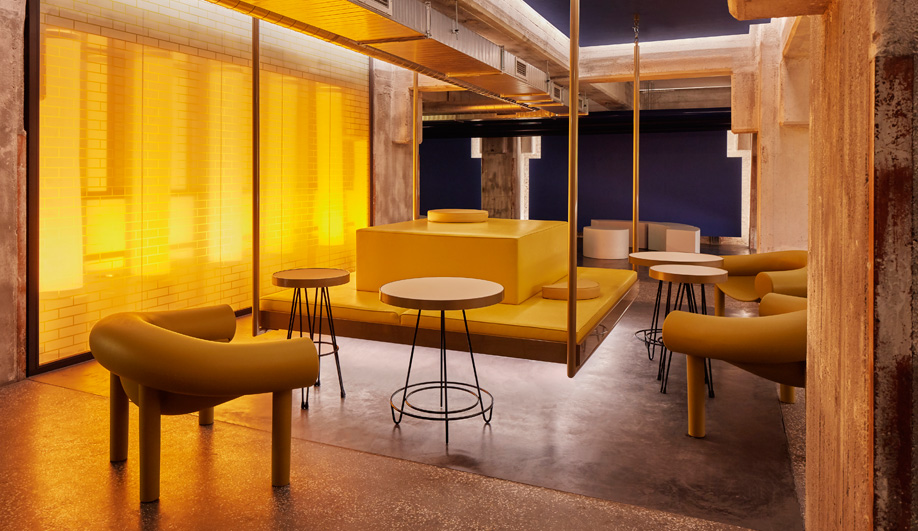 To construct all the custom built-ins, Studio Modijefsky chose to collaborate with Fiction Factory. Founded in 1989 as a theatre scenery company, Fiction Factory is a construction studio that also realizes its own wacky creations, including 2016’s Wikkelhouse, a small-scale house prototype composed of interlocking cardboard segments.

“We know with which companies we have a mutual understanding, which are the super-precise ones that are into details and willing to reinvent some wheels,” says Esther Stam, Studio Modijefsky’s founder. “Fiction Factory is like us – it’s not an off-the-shelf company. It has electrical, metal, wood and upholstery shops and they draw everything themselves.” Together, the two firms devised various types of seating to encourage different ways of using the facility. Furniture, says Stam, is a good way of defining spaces, while customization distinguishes a firm from others. 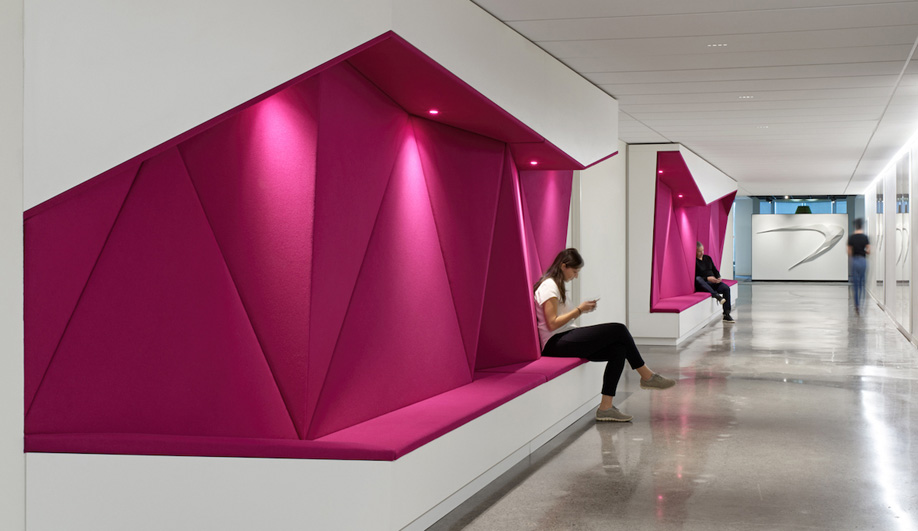 Capital One’s new headquarters in Toronto is a workspace designed to attract and retain top fintech talent. And it does so by prioritizing flexibility and spontaneity. The offices are spread across multiple floors in the middle of a downtown tower, with each level featuring a unique central corridor concept that brings together built-in seating, power, lighting and whiteboards. For instance, one concept comprises a pair of fractal nooks, upholstered in fuchsia. Another, more daring one features a ribbon of seating clad in blue Maharam wool fabric; anchored to the ceiling and wall, the faceted band is made of steel plate, with cushioned panels clipped to the structure. 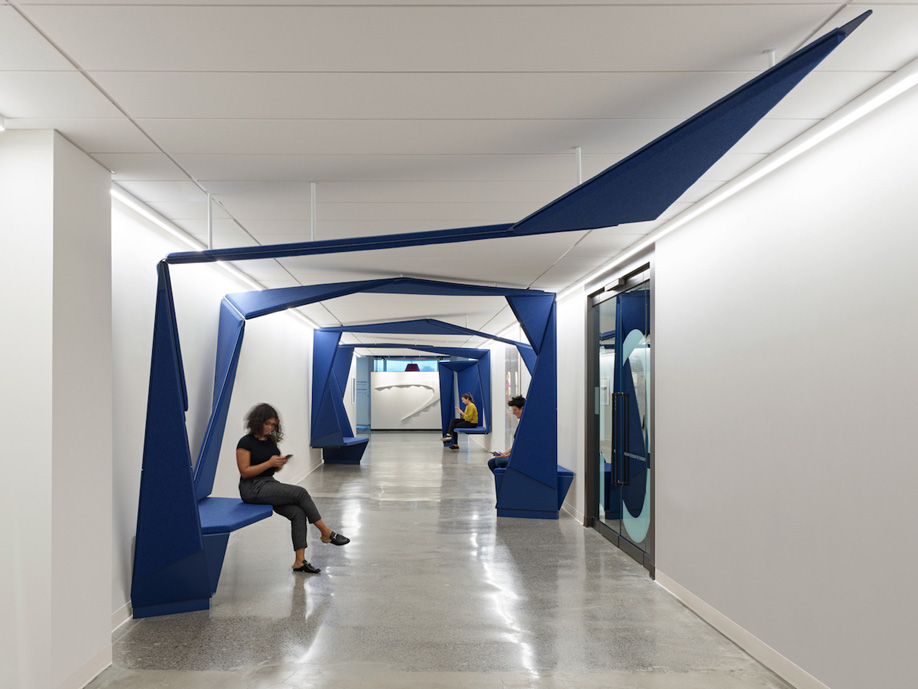 Eventscape was contracted to engineer, build and install these standout elements, which were designed by IBI Group, the interiors firm that led the project. The Toronto-based fabricator built custom elements in its factories (which the design team inspected) and then broke them down, shipped them to the site and reassembled them in situ. The breakout spaces foster collaboration and feature writable wall panels, enabling staff to ideate on all surfaces.

SHARE
Twitter, Facebook, LinkedIn, Pinterest, Email
TAGS
Hospitality, Office furniture,
AZURE is an independent magazine working to bring you the best in design, architecture and interiors. We rely on advertising revenue to support the creative content on our site. Please consider whitelisting our site in your settings, or pausing your adblocker while stopping by.